How to Create The Perfect Show Bible If you want to pitch a TV series, consider the metaphor of a road trip. You don’t just pack a bag or talk about what you’d like to see and do at your destination. You also want to know who’s coming with you, whose vehicle you’ll use, and your general route and possible stops along the way. Before we dive in, you'll definitely want to download 21 Series Bibles That Every Screenwriter Should Read.

Likewise, a pitch for a TV series involves more than just writing the pilot. You need to write a guide to go with it - in industry circles, this is called the show bible or series bible. Calling it a bible doesn’t mean it’s a weighty tome. (Consider it an atlas if that’s less intimidating.) But it is important. Just as your road-trip plans offer a taste of your journey – are we talking National Lampoon’s Vacation or Nebraska? – the show bible offers you another opportunity to highlight your skills as a writer or showrunner, plus it indicates to executives that you have an idea with enough storytelling potential to last five seasons.

“[P]roducers are never really asking for a bunch of boring information about your TV series. What they’re really asking is proof that you know what you’re doing, and that your series pilot not only has a fabulous premise and collection of castable characters we’d want to spend our time binge-watching, but also has the kind of engine required to run for at least five years,” said Jacob Krueger, the screenwriter (The Matthew Shepard Story), playwright, producer, and director who teaches screenwriting through the Jacob Krueger Studio in New York City.

The engine is what powers your concept, kind of like the vehicle for that road trip. A story engine might be tough to visualize solely by reading a pilot, but a show bible done well makes it easy for a writer to reassure someone with the power to buy the project that there’s enough material here to go the distance – and to earn money the longer it’s on the air.

Here's a great tutorial video from our friends at StudioBinder:

StudioBinder also has great examples on their episode page and their series page.

“In order to make a compelling case for your show, you have to have a clear understanding of where it is going to go, which means not only having clarity about the pilot, its themes and the story engine contained within, but also about the season and the series arc that the pilot episode will drive us into,” says screenwriting career coach and consultant Lee Jessup.

Show bibles help producers grasp the entire concept. Although the bible includes details such as characters and episode synopses, what you’re really doing by writing one is delivering “the compelling hook that demands your reader’s attention, and answers their fears” about whether this project is worth the investment, Krueger said.

Unfortunately, some writers can craft a good pilot script but run out of steam when they put the show bible together. Author, script editor, and producer Lucy V. Hay, who runs the writing blog Bang2Write finds that series bibles often fall flat because they’re either dull or much too long.

She recommends aiming for four to five pages of core material. This includes:

You can include extras such as a letter or interview with the protagonist or antagonist; photographs or concept art; a few paragraphs about the story’s setting or tone; and location details, especially if the setting is a character in its own right, Hay said.

Obviously, some show bibles are more comprehensive, especially if there’s a lot of world-building or mythology involved. The series bible for Battlestar Galactica, the 2004 reboot of the 1970s series about the last of humanity traveling toward Earth, runs 53 pages, including the political history and state of the galaxy when the series begins and how the Galactica maneuvers as a spacecraft. The Wire, the HBO series that tackled the Baltimore drug scene during its first season, is really about the dysfunction of the institutions in American cities, later segueing into the city’s politics and press. Its series bible runs 79 pages.

But brevity is a good launch pad. Before sitting down to write your series bible, you also should know whether you’re writing a single-camera half-hour comedy like Girls, or a multi-camera comedy like The Big Bang Theory, Jessup said. If you’re writing a drama, is it a one-hour procedural (a case-of-the-week show) like Elementary or ER? A one-hour season procedural like 24 or The Following? Or a one-hour serialized drama like Game of Thrones? Also be clear about the emotional core and character arc within your show. “Knowing this helps you focus your vision and your pitch to the right network”, she says.

Keep it focused by using each part of your series bible to enhance the potential conflict, says Krueger. He recommends including:

Writing a pilot?  Sign up for our 'Write Your Pilot eCourse' here! 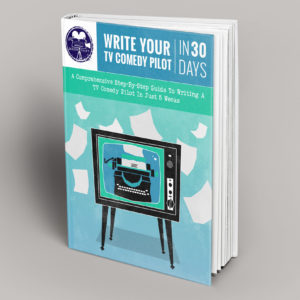 Lastly, don’t forget tone. If you’re writing a comedy, your series bible should be funny. The bible for the BBC America series Dirk Gently’s Holistic Detective Agency, based on the works of author Douglas Adams, is fairly short at 28 pages but is as quirky in its comedy as an Adams book.

“Hi, hello. Welcome. Bonvendu. I believe that’s how they say ‘enter peacefully’ in French,” the introduction starts. “Don’t check that. Don’t fact check that. You’re distracted, stop it, concentrate. My name is Dirk Gently. And you are reading the Series Bible for my television show, Dirk Gently’s Holistic Detective Agency. This show, of course, is the long-awaited follow-up series to HBO’s critically acclaimed No. 1 Ladies’ Detective Agency, which -- Oh, it isn’t? I’ve been informed that it isn’t. I should have googled this. I thought we were doing an Avengers thing.

Perhaps the most important thing to remember is this: nobody wants to hit the road for a boring slog. Zero in on the high points of your expected journey, and you’ll not only attract interest but people glad to go along for the ride.

Valerie Kalfrin is an award-winning veteran crime journalist turned entertainment writer. A member of the Florida Film Network, she writes reviews and analysis for The Script Lab, Signature Reads (formerly known as Word and Film), and The Tampa Bay Times, among other publications. She’s also an emerging screenwriter and script consultant. She lives in Florida.