Ah, family dinners -- the place where embarrassment is often stronger than the wine.

Family movies of various types play into the idea of the family dinner scene with different goals: to make you laugh, make you cry, or make you facepalm. And the ones we've listed below are most definitely worth watching.

Check out some of the best cinematic dinner scenes and prepare yourself for your own family’s dinner table antics.

There’s nothing like falling for someone, and realizing she’s dating your brother. Dan in Real Life is a series of moments surrounding this same dilemma for Dan, a middle-aged father of three. As a writer, he’s mortified to learn at the dinner table that his brother used his own writing to win this girl over, and as a result, he can’t even form a coherent follow-up in conversation.

This scene is packed with heartfelt sympathy as well as a moment or two of secondhand embarrassment, so beware! 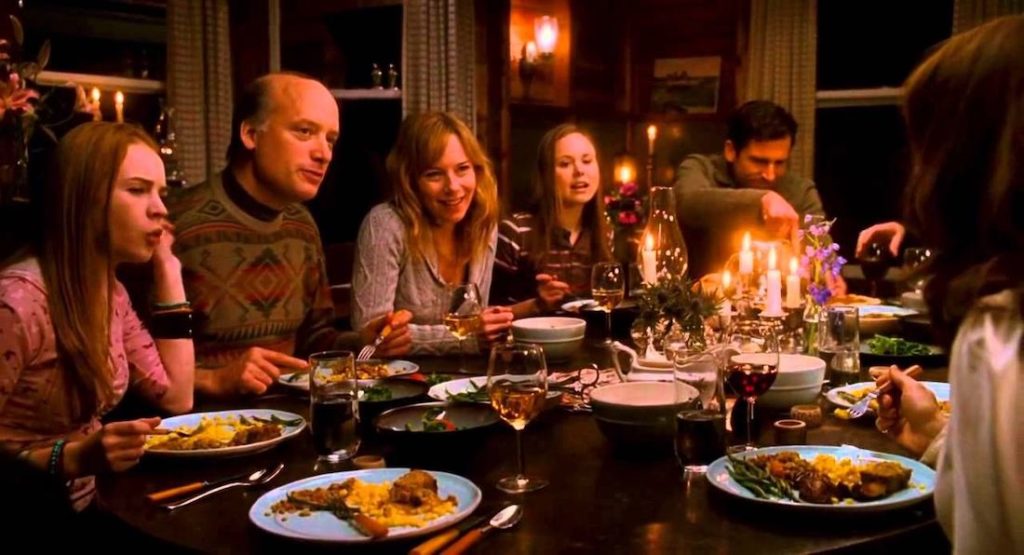 The whole film is about a family dinner, but we don’t actually get to that part until the end. Why? Because this rom-com is geared toward the pre-dinner awkwardness that overcomes a white family in the 1960s when met with the unexpected revelation that their daughter’s fiancé is black. The patriarch addresses both families and the couple with a clear message: “These two should marry because they love each other, in spite of the society they’re up against.”

The speech ends with a request for dinner, and soon the whole family sits down to the end credits and breaks bread together. Talk about a dinner scene that works to show the theme of the story!

The stillness of an awkward family dinner is broken at first by the clinking of metal as Edward, the titular character, uses his bladed hands to try and have a normal dinner with a normal family. The difficulty is an underscore to what he goes through in other parts of the film, but everyone’s attempt to treat him normally (apart from Kevin) makes it clear he’s primed for acceptance among some people.

Of course, like all strange characters, he has trouble fitting in elsewhere anyway -- especially thanks to his scissorhands. But Peg’s family treats him as normally as they can think to, and it’s as heartwarming as it is comic.

Back to the Future

Ever relish in that moment in a comedy where everything is meant to be a nod, a reference to something else specific and possibly earth-shattering? That’s Back to the Future for you! The dinner scene in the Baines family home is one of those moments, rife with anachronisms to tell you exactly how out of his depth Marty really is.

From talking to his imprisoned uncle Joey as a baby to avoiding the advances of his young, lovestruck mother -- there are so many ways to get the viewer’s attention and tell them the same thing: Marty’s not in 1985 anymore.

A classic dilemma plays out in the “out to dinner” scene of Mrs. Doubtfire, where passionate voice talent Daniel Hillard is forced to play out his alter ego in the same night as he woos his boss’s boss for a potential career opportunity -- as well as spending time with his estranged family for his ex-wife’s birthday.

The hilarity of this situation ensues when Daniel switches between being himself and being the beloved nanny for his kids, Mrs. Doubtfire. Needless to say, things don’t go according to plan, and his cover winds up being blown. What it does go to show is just how much a father will do to earn time with his family after losing them.

Sherman Klump is a man whose discomfort with his size is a part of the gag for the whole movie, and his family dynamic demonstrates exactly why he’s incapable of escaping his current situation, even though he wants to.

Sherman’s main conflict and even the concept for the story, his genetic research, play a part in the discussion amidst an escalating use of fart humor and tongue-in-cheek references to health as a whole. As if that weren’t enough, it also serves as a showcase for Eddie Murphy’s caricature acting, as he takes on multiple disparate roles at the dinner table just for laughs.

In this household classic holiday film, Ralphie’s family has dinner together multiple times that we see. However, the scene where Randy refuses to eat his meatloaf is especially interesting for the narrative, as it’s indicative of the family dynamic, as punctuated by Ralphie’s narration stating that his mother had not had a hot meal for herself in over 15 years.

It demonstrates Mrs. Parker and The Old Man’s differing parenting styles, their interactions with the children, and at the end, it shows us what kind of things can pull the family away from the dinner table: namely, winning a major award.

Sophie’s trying to break a curse on herself, but along the way, she becomes a part of Howl’s family -- which includes a fire demon who’s handy in the kitchen. The four eating together may not be a conventional family, but Sophie starts to prove she belongs with them pretty early on, as is evidenced by Calcifer starting to obey her when she takes to cooking bacon, eggs, and tea for the group.

For this gorgeously illustrated scene, it may all be breakfast food, but it’s in the spirit of a family dinner -- that’s for certain!

The Incredibles are a family of superhumans, and with that premise comes a lot of playtime. Whether it’s introducing the struggles of “acting normal” or all-out sibling warfare that takes place between Dash and Violet, there is an opportunity for not only showing off these characters’ powers but also giving us a taste of what’s missing in their lives.

This is especially true with Bob, Mr. Incredible himself, whose interest in certain newspaper articles indicates what he’s missing in his life most of all.

This dinner scene is pivotal for a number of reasons, as it’s the way that Peter learns to embrace his childlike side once more -- first by taking to the immature insult battle with Rufio, and eventually to use his replenished sense of imagination, turning an empty table with no food into the battleground for an epic food fight.

If there was any way to watch Peter Pan (Banning) return to himself after becoming a mirthless workaholic, this is one of the most creative and enjoyable ways to do it!

It’s not about what’s for dinner -- it’s about who’s there having dinner, and possibly what happens while you’re there. Whether you witness a heartwarming speech, a wordless sup between friends, or a chaotic mess of a meal where “family” means picking on each other quite a bit, these scenes are meant to convey something important in each story -- and they each feel real for one reason or another.

From sibling rivalry to embarrassing extended family, you’re going to be inspired at your dinner table, too. So, if you pay attention, you might just get something to write about this holiday season. 40 Incredible Movies Based on True Stories 10 Films You Have to Watch If You’re Writing a Romantic Comedy
X
Screenwriting Newsletter
Join our community of over 100,000 screenwriters and get weekly inspiration delivered to your inbox: