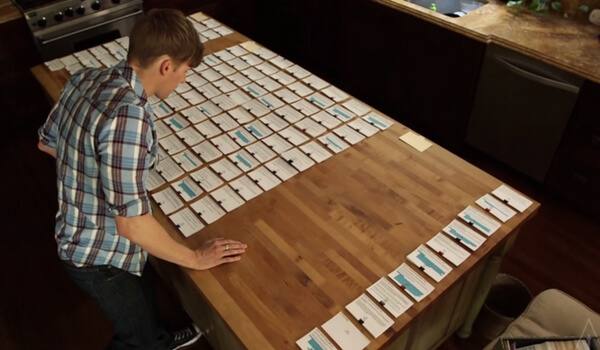 Before firing up the screenwriting software and facing that blank page, there’s a lot of planning, plotting, and story engineering that takes place -- for good reason. The “pre-writing” or “story-breaking” part of writing a screenplay is vital. But wrangling all of those initial ideas can feel overwhelming.

There’s one tool that’s arguably helped more screenwriters through their story development process than any other. It’s been used for years and is still used to this day, by scores of amateurs and professionals alike. What is it?

That’s right. Notecards. They’re tactile, which helps tap into a different part of your creativity than typing into a document, one that feels more like playing than working. They’re non-linear, making it easy to move and shuffle them as much as needed. Plus they come in different colors, which is great for visualizing story.

Notecards are a flexible tool that you can make your own. No two writers likely use them in exactly the same way, and even from project to project there can be variation based on a particular project’s needs. Here are a few suggestions to help you get started:

Starting a new project? Write down every scene you can think of for your movie, one scene per card. In this first brainstorming stage, don’t limit yourself or judge your ideas. Just get them all out there.

Then, begin to organize your cards into four piles: Act 1, Act 2A, Act 2B, Act 3. No need to put them in order yet; simply sort each notecard into the pile you think it might go. Take one pile at a time and see if you can form a linear flow with the cards you have. If a notecard feels out of place, move it to another pile. If a notecard feels useless, set it aside. Once you have some scenes in place, you’ll begin to see what other scenes are needed to bridge between them.

Nothing is set in stone, and you can always move cards around or throw some away completely and replace them with others. But go through this process with each of your four piles, and when you’re done you’ll have brainstormed your entire movie. It’s an easy way to create a starting point, which is sometimes the hardest part.

There are many ways to tackle outlining with notecards. Some writers get detailed with their cards, making one for each scene. Others follow a preferred structural paradigm and make cards for each of the story beats or turning points referenced with that particular system. It’s truly up to you.

In a 2010 blog post, screenwriter John August (Big Fish, Frankenweenie) put forth these 10 tips for his method of using index cards:

Want to see another method? This video of screenwriter Dustin Lance Black (Milk, J. Edgar) offers inspiration with an inside peek at his creative process – using notecards.

>> Is outlining right for you? Read 3 Pros and Cons of Outlining Your Screenplay

Color, too, can be completely personalized to a writer’s preferences. Some writers choose to use notecards of different colors, while other writers use all white notecards along with highlighters or Sharpie markers to indicate which cards contain certain elements. Different colors can be used to help track emotions, characters, locations, time of day, or anything else a particular story might benefit from.

One of the more common uses for colorful cards may be tracking individual plotlines or story arcs. Giving each its own color helps to be able to visualize the rhythm of the movie, how the storylines intersect, and where a plot thread may drop out of view for too long.

Notecards are a timeless tool with endless variations on its uses. And because they're inexpensive, they offer a low-pressure way to experiment with both your story and your method. Bring some fun to your writing! Play around with the tips here, finding what works best for you and your process.