How to Differentiate Good Writing From Bad 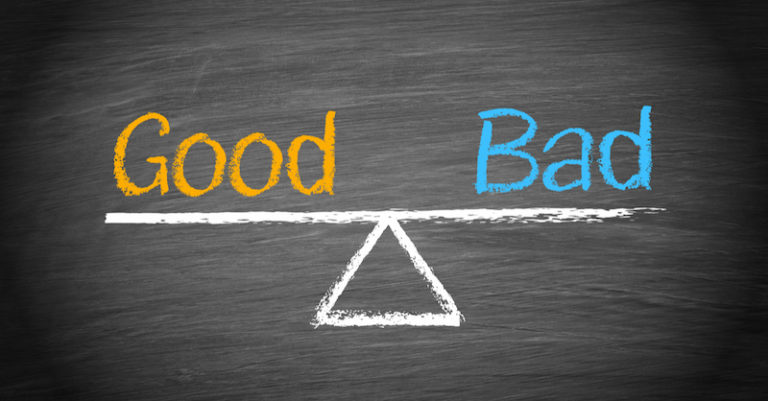 How do you differentiate between "good" and "bad" writing?

We're not talking about whether or not a screenplay or novel has seemingly endless grammar, spelling, and format errors. That's an obvious objective observation.

Beyond such errors, writing is actually subjective — a fact that most people online (and most critics) forget.

And sometimes it's about the context.

If the screenplay behind the script The Tree of Life was written on spec by an unknown writer, it's very likely that it would have been tossed aside by most development executives as an incoherent screenplay that has no focus, is all over the place, and contains random scenes and moments that belong in other movies (creation of the universe, dinosaurs, etc.). But since it was written by a master auteur — Terrance Malick — it's considered by many as brilliant.

In publishing, Stephen King is thought to be one of the greatest writers of all time. But plenty of people will scoff at his work compared to the likes of Edgar Allen Poe to Cormac McCarthy, and many others.

However, some criteria bases can be applied to screenplays and novels from novice writers and established ones. While the result of these bases is subjective for each individual, a writer can use them to ensure that they are at least doing all that they can to pull on the heartstrings of some faction of the audience.

Here we present five ways to tell the difference between good writing and bad. And if you don't agree with any of them, well, that's your subjective perspective. No one is right or wrong. But this hopefully gets you, as a writer, thinking more deeply about how you are writing that wonderful story with those great characters.

1. It's Good Writing If I Care About What the Characters Are Going Through

We've seen plenty of movies and have read enough novels that contain characters we really don't care about. If we don't care about your protagonist, we're not going to be invested in the story.

But how do can you accomplish that? How can you make the audience or the reader care about the characters?

Empathy. We need to relate to them on some level. If a character is indestructible with no emotions and focused solely on an objective that is entirely selfish and self-centered (killing a villain that tried to kill him), there is nothing there — even if the conflict is ever-present with the hero going up against hurdle after hurdle in their pursuit of the bad guy.

Now, if your protagonist is vulnerable (see below) and they are focused on saving not only the lives of hostages but also his wife, we care. 2. It's Good Writing If It Surprises Me

There's nothing worse than a predictable story.

You surprise an audience or reader by taking the cliches, tropes, and predictable plot points and turning them on their heads. Lead the viewer or reader down a path they feel is familiar, only to push them through a bush of thorns revealing an even more precarious way.

Look no further than the criminally underrated thrillers The Next Three Days. When you watch the below trailer, chances are you'll believe you know the twists and turns to expect. But the actual screenwriter behind the film knows that you are expecting these routine plot points — so the writer flips those cliches, tropes, and predictable plot points on their head and takes us where we didn't expect to go.

3. It's Good Writing If the Characters are Vulnerable

As mentioned above, vulnerability is a crucial factor in good writing. Your protagonists — and even your antagonists and villains — need to be vulnerable in some way, shape, or form.

Die Hard was so successful because the writers went away from the Sylvester Stallone and Arnold Schwarzenegger action blockbuster mold with characters that had superhero-like invulnerability — both emotional and physical — and presented a protagonist that was susceptible to physical and psychological harm.

Aliens presented a protagonist that was haunted by the past in which she experienced physical horrors, as well as the emotional scars of missing out on her daughter's life as she floated in space for 57 years.

Sarah Connor in Terminator 2: Judgement Day was haunted by what she physically experienced with the first Terminator assassin, as well as being haunted by the emotional turmoil of knowing that Judgement Day is coming. We empathize with her because of the struggle we saw her go through in the first film and because we relate to or empathize with the concept of nobody believing the truth that she knows.

Vulnerability helps us relate to and care about the characters even more. And that's good writing.

4. It's Good Writing If the Stories Show More Than They Tell

It's fascinating to watch characters when they are not speaking.

Most audience members and readers would rather see a character throw a glass against the wall in anger and rush out of the room than hear a character say, "I'm so angry!"

Bad writing usually involves endless exposition dumps within dialogue — characters that are either saying what they already know for the benefit of the audience or reader alone or telling us stories of actions that have happened off screen or away from the story being told.

5. It's Good Writing If the Writer Has Honed Their Craft

In screenplays or novels written by novice writers, having some of it be great isn't enough. This is a key problem with so many writers trying to make that jump from bad to good.

Everything within the script or manuscript has to be fine-tuned. Every moment and line of dialogue and description has to be in there for a reason.

And it takes time to hone your craft. For screenwriters, it takes at least a couple of scripts — likely a few. For authors, it takes multiple short stories and a couple of attempts at a full novel.

And to truly hone your craft, you have to write, write, and write some more. You can't stop at that first screenplay, short story, or novel and focus on trying to sell, sell, sell. It's worth it to take the extra time — one to two years or more — to write multiple scripts and manuscripts and hone your craft in the process.

Every screenplay, short story, or novel that doesn't have these five elements can and should be considered bad writing.

Anyone can take a character from Point A to Point Z. You need to be able to make us care about the characters, surprise us throughout the story, present vulnerable characters that we can relate to, focus on physical actions and reactions over bad expositional dialogue, and present us with a screenplay or manuscript that showcases how much you've honed your writing.