We tend to doodle and draw long before we have the ability to write. Indeed, drawings predate written language in ancient human history.

Considering the history of humans using visual art to tell their stories, it’s no wonder that animation remains a mainstay in household entertainment long after our childhoods have ended. We have grown to appreciate the medium well into adulthood, and for some writers — it is their calling to inspire the next generation of animated writers the same way Matt Groening or Trey Parker and Matt Stone inspired them.

Mark your calendar for our ScreenCraft Animation Screenplay Competition with top industry judges!

When searching for the right path for your career, why should screenwriters consider writing for animation?

It goes without saying that animation is a visually dominant medium. Sure, screenwriting is visual storytelling, but animation specifically demands fuller details to fill the blank slate.

The animation writer loves a juicy description paragraph. That isn’t to say that a block of description should take up half a page. The visuals should still be presented in as minimal a manner as possible, leaving room for the visual artists to work their magic. Every word needs a purpose.

Take this excerpt from WALL-E as an example. Screenwriters Andrew Stanton and Jim Reardon use short, succinct lines that are similar to lines of poetry. Space isn’t wasted on extra words. Each description is chosen to give a clear image that helps establish Wally’s world.

After revealing that Wally is a “Waste Allocation Loader - Earth Class,” we’re left to wonder about the fate of our world. Check out this excerpt:

CLOSE ON NEWSPAPER Wally drives over.
Headline: “TOO MUCH TRASH!! Earth Covered!!”
The deck: “BNL CEO Declares Global Emergency!”
A photo of the BNL CEO giving a weak smile.

We are given all the details we need — not through exposition or voiceover, but with separate and specific details that build into a unified understanding.

Animation doesn’t need dialogue to move the story forward, but dialogue still plays a major part in most sitcoms, series, and features. There are examples of animated features with long stretches of minimal dialogue. When you do use dialogue, it should be especially succinct and/or fun. Because animation often caters to both children and adults alike, witty dialogue and quips are essential to keeping everyone engaged. In the same way that TV series use a "button" to end a scene, it's important for writers of animated stories to master the art of the "button" -- a quip, ironic twist, or final joke for the audience to take away with them at the end of a scene or episode.

Many short animation films, however, have no dialogue at all. The story is driven forward by the actions of the characters dealing with symbolic scenarios like a boy cleaning up fallen stars on the moon in La Luna or a baozi bun that comes to life and gives an aging woman a second chance at motherhood in Bao.

The length of these shorts allows for the absence of dialogue and for the stories to be more abstract because they don’t have to keep an audience’s attention for two hours. This gives the screenwriter ample opportunity to let their imaginations shine.

Your Vision Calls For Animation

Is your sci-fi sitcom set in the 31st Century with aliens and humans cohabitating?

It’d be hard to imagine a show like Futurama being pulled off with live action. All those hours of hair and makeup would cost a fortune by itself. Not to mention the massive CGI billing. Maybe a franchise blockbusting feature, but a comedy sitcom? Hey, never say never.

Animation allows for the screenwriters mind to forget about those sort of budgetary concerns. Of course, the more complicated the scene, the more it’ll cost for animators to work it — but you don’t have to worry about paying an entire crew of explosive technicians, stunt coordinators and performers, medical personnel, key and grip…you get it.

Animation can be simple and still be infinitely more believable and endearing than live action — despite how unbelievable the premise may be (a house being carried away by balloons, for example). Some stories require animation in order for the production to match the quality of the writing.

To further the previous point, sometimes live action doesn’t allow the screenwriter enough creative freedom. As mentioned before, there are limitations to what productions can accomplish on set and within budget.

What’s a writer to do when their imagination needs more space to roam free?

Spider-Man: Into the Spider-Verse broke the boundaries of reality, and animation was the perfect vehicle for a team of high flying Spider-People/Pig.

Animation allows for the rules of reality to be bent. Take for instance this description from the stop-motion animation Kubo and the Two Strings:

The woman raises her hand, strikes the strings on her shamisen, and the sea literally parts in front of her, allowing safe passage clean through the center of the chaos.

The boat floats onward, approaching a rocky coastline beneath high windswept cliffs, and at the sight of land the woman gives an almost imperceptible smile.

Fantastical elements can be a wonder to behold when done with animation. Whether drawn by hand, mapped out on a computer, or molded by hand — animation can bring your imagination to the screen in incredible bursts of artistry.

You Have a Passion for Animation

Does the nostalgia of Nicktoons still wake you up on Saturday mornings? Or maybe you miss the rush of sneaking into the living room when everyone’s asleep to watch South Park against your parents’ permission.

Maybe you grew up thinking that no matter what else you’d accomplish in life — nothing would be better than being in the writing room for your favorite animated show. You were born to write for animation. Then you certainly can’t ignore that kind of calling.

If writing for an animated sitcom is something you’ve always wanted to do and you have a knack for creating great archetypal characters like Bart Simpson or Eric Cartman, then perhaps you should hone in on animation as your style and pursue it as your ultimate goal.

You Enjoy Writing by Committee

Animation houses such as Pixar and Disney are known for their clinical approach to developing their screenplays. Over the course of 2-3 years, each scene and character motivation is forensically dissected in order to make the quality of the story the best it can be. They move on from the script to a ‘story reel,’ which is pretty much just a comic book version of the film, and work out any issues.

If you’re a writer that thrives in a collaborative environment where there are a lot of different cooks in the kitchen, then animation would be a great fit for you. The studio executives arrange test screenings and focus groups for these story reels in order to get the story just right. Writers are often working well into production.

This development process allows a writer to dive deep into what makes a great story. The writer is both the teacher and the student while developing the joint effort of a major studio animation. By slowly deconstructing every aspect of their script, they come away with a better understanding of the writing process.

Are you a young hungry writer who knows an extremely talented digital artist?

See where the collaboration takes you. Increased demand for animated shorts on YouTube and other platforms allows for large audiences to consume your work. The world has never been so accessible to creatives. Take advantage of it.

Some narrators are willing to pay the author a percentage of their earnings, so if you have a good script that might fit their formats — feel free to reach out. If you’re ambitious enough and can consistently create enough content to build a subscriber base, then start your own channel.

Now, if you’re one of those renaissance artists who is both an incredible writer and a talented visual artist, make the effort and invest in yourself. Create, submit to festivals, build your base, monetize, and repeat.

There are many reasons why a screenwriter should consider writing for animation. Regardless of your reason, always remember this quote from Pete Docter (Pixar):

“Work hard! In the end, passion and hard work beats out natural talent.”

Why do you choose to write for animation? We’d love to hear what inspires you. 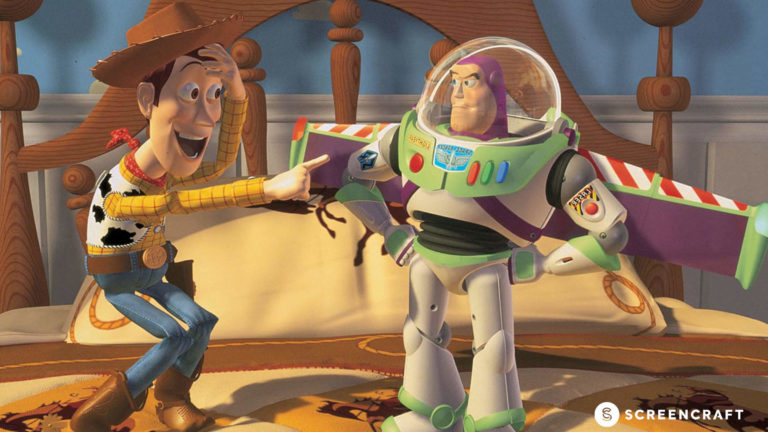