Welcome to our ongoing series — Screenwriting Plants and Payoffs — where we highlight films within multiple genres and break down how they effectively use plants and payoffs.

The Screenwriting Plants and Payoffs of A Quiet Place

"The origins of A Quiet Place date back to our college years, as we became obsessed with the silent cinema of Charlie Chaplin, F.W. Murnau, Buster Keaton, and Jacques Tati. These filmmakers were masters of visual storytelling, needing not one line of dialogue to communicate character, emotion, or intent. Cinema had never felt so pure. But having been raised on a healthy dose of Alien, Jaws, and dozens of Hitchcock films, we wondered if you could fold the silent visual techniques of the early 20th century into the context of a modern-day genre film. And thus, A Quiet Place was born."

Beck and Woods started the script in January 2016. By that July, John Krasinski read their draft, which appealed to him because of the concept of parents protecting their children. He and his actress wife, Emily Blunt, had just had their second child. Krasinki was looking for a project to direct. Everything came together.

By March 2017, they sold the script to Paramount. Paramount then hired Krasinski to rewrite the script and direct the film. Krasinski's wife was cast as his co-lead.

Now, let's get to the plants and payoffs.

The Sound of Silence

In the film's first images, we see the importance of silence as the family maneuvers through the deserted town, searching for supplies. We see the news headlines of magazines and newspapers that reveal key details and exposition.

We see the tactics that the characters are forced to utilize to remain as silent as possible to avoid detection from the as-yet-seen threat.

These elements introduce the concept of the screenplay and plant plot elements that will be paid off later in the story.

When Emily Blunt's character steps ojn a nail, that's a payoff of the introductory images of them needing to be barefoot. It's subtle, yes. But those subtle plants and payoffs are what make a screenplay that much stronger — especially when they are spread out throughout the whole story.

He's four years old and doesn't understand the threat. He knows that he needs to be quiet, but he doesn't know how to avoid situations that will be dangerous for him and the family. In the opening sequence, we are given subtle plants that will be "paid off" in tragic form.

All of these moments are plants that foreshadow his fate.

In the opening sequence, we see the tragic loss of the youngest member of their family. It's set up with those quick plants and a heartbreaking payoff.

The family is hiking home, only to hear the loud sounds of the toy space shuttle that the boy found. Back in the store, the older sister had given him the toy, unbeknownst to the parents. The father had taken the batteries out and left them on the shelf. The little brother grabbed the batteries without anyone seeing him do so.

This visual plant informs us that something bad is about to happen. We couldn't imagine the unthinkable, though. When the sounds of the toy ring out, they look back and see that the boy is far behind.

The father tries to get to him. The other members of the family know that it's too late. They watch in horror as the boy is quickly killed by a creature that reacts to sound only.

This emotional event is also a plant in itself. It tells us that no one is safe. Not one single family member that we've met is off-limits. If they will kill an innocent child, the youngest of the bunch, then anyone is game. This is later paid off in the third act when the father dies an equally tragic death, sacrificing himself for his children.

When we get to their house, we quickly see more newspaper clippings that give us information that pays off later on in the story.

The dry-erase board offers us additional plants as well.

All of this information pays off by the end.

We also learn that soundproofing is going to come into play at some point. This pays off when they escape into the lower level, and we learn that they're safe (for the time being) there.

The best plant is the question: What is the weakness?

By the end of the film, we learn that the creatures' weakness is a certain frequency that creates audio feedback — it rattles their hearing instruments and brain. And this is brilliantly planted multiple times with the girl's hearing device moments. We have a subtle plant with the older surviving son pretending to drive the old truck on their land.

What seems like an imaginative moment of a child pretending is actually a plant that pays off in the film's third act when the father provides the sacrificial distraction that allows the brother and sister to escape by disengaging the vehicle's brake.

The father takes the son to a waterfall. He teaches him that louder sounds can easily hide smaller sounds. The sounds of the fall allow them to scream at the top of their lungs and talk openly without having to use sign language and whispers.

This knowledge is paid off in many ways throughout the rest of the story, with the characters using louder sounds to distract the creatures. We see more of a direct mirror to the waterfall plant when the mother is trapped in the flooding basement with her newborn baby. The sound of the water hides the baby's sounds. She even hides behind a small waterfall underneath the stares to further conceal the baby's sounds. 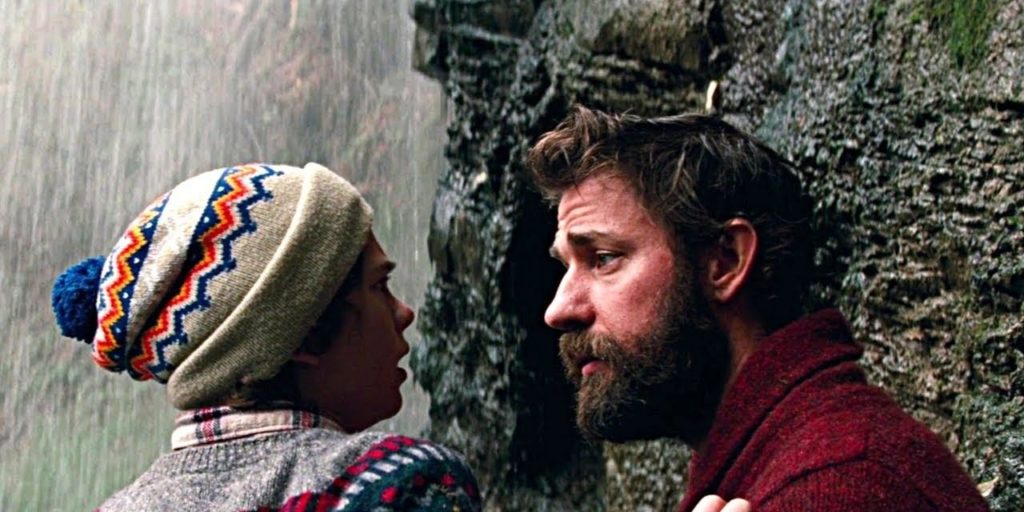 As the mother brings up supplies from the basement, we see her bag snag on a bent nail on one of the wooden steps. The nail goes straight up, creating a painful situation paid off after she goes into labor and tries to escape the creature in their house.

Another subtle plant and payoff — one of many throughout the screenplay.