9 Types of Enneagram Personalities Writers Can Use for Characters A trick that we've heard many professional writers using to create meaningful distinctions between characters' voice and underlying motivations is the Enneagram personality framework.

The Enneagram defines nine personality types represented by the points of a geometric figure called an enneagram — indicating connections between the types.

In business, the Enneagram is used as a typology to gain insights into the dynamics of workplace interpersonal relationships.

For writers, these nine personality types can be used to create characters that have more depth and arc. They define what these types of characters want, need, and fear — all elements that encompass character depth.

Here we share the nine types of Enneagram personalities and what makes these types of characters tick. Direct definitions are taken from The Enneagram Institue, created in 1997 by the late Don Richard Riso and by Russ Hudson and formed to further research and development of the Enneagram.  We offer our own brief elaborations as well.

"[Reformers] are conscientious and ethical, with a strong sense of right and wrong. They are teachers, crusaders, and advocates for change: always striving to improve things, but afraid of making a mistake. Well-organized, orderly, and fastidious, they try to maintain high standards but can slip into being critical and perfectionistic. They typically have problems with resentment and impatience. At their Best: wise, discerning, realistic, and noble. Can be morally heroic."

These types of characters strive to be good people full of integrity, and fear corruption, evil, and imbalance.

They thrive in stories that center around ethical debates as we wait to see if they'll meet their breaking point. Captain America in Captain America: Civil War is a prime example as he deals with political involvement in the Avengers' affairs. "[Helpers] are empathetic, sincere, and warm-hearted. They are friendly, generous, and self-sacrificing, but can also be sentimental, flattering, and people-pleasing. They are well-meaning and driven to be close to others, but can slip into doing things for others in order to be needed. They typically have problems with possessiveness and with acknowledging their own needs. At their Best: unselfish and altruistic, they have unconditional love for others."

They strive to be loved and are usually very loyal, and fear being unloved and unwanted.

Samwise Gamgee in the Lord of the Rings trilogy is the perfect Helper. He'll do anything for Frodo. He's kind, generous, and would sacrifice his life for his best friend.

Want to come up with a name as perfect as "Samwise Gamgee"?  Download our free eBook for some inspiration!

This character type offers excellent support for any protagonist. They can also take a darker turn within a story as a character that is driven towards overly possessive behavior. "[Achievers] are self-assured, attractive, and charming. Ambitious, competent, and energetic, they can also be status-conscious and highly driven for advancement. They are diplomatic and poised, but can also be overly concerned with their image and what others think of them. They typically have problems with workaholism and competitiveness. At their Best: self-accepting, authentic, everything they seem to be—role models who inspire others."

The Achiever wants to feel valued and worthwhile, and fears being worthless.

Scarlett O'Hara in Gone with the Wind fits this type, for good and for bad. She's a self-involved, pampered socialite, and cares a great deal about her status as the world around her crumbles. If your story needs a socialite, this character personality is the go-to type. They can be antagonists and villains. They can be protagonists that evolve amidst their drive to succeed and advance. Cher from Clueless is a perfect contemporary example in that respect. "[Individualists] are self-aware, sensitive, and reserved. They are emotionally honest, creative, and personal, but can also be moody and self-conscious. Withholding themselves from others due to feeling vulnerable and defective, they can also feel disdainful and exempt from ordinary ways of living. They typically have problems with melancholy, self-indulgence, and self-pity. At their Best: inspired and highly creative, they are able to renew themselves and transform their experiences."

These characters strive to find themselves and their significance in the world — and fear that they'll find that they have no individual identity. They are especially perfect for coming-of-age stories that center on unique individuals that stand out from the rest.

Nadine in The Edge of Seventeen fits this mold perfectly. She's different and awkward, struggling to find her place in life amidst her perfect brother, her best friend that has started dating him, and her exploration of a possible love of her own. 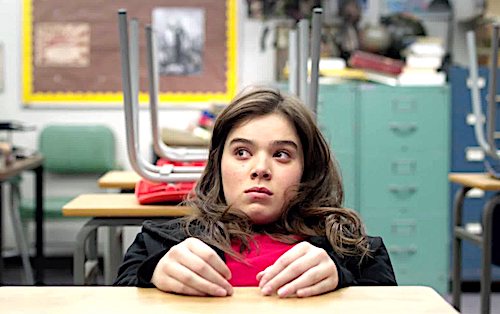 "[Investigators] are alert, insightful, and curious. They are able to concentrate and focus on developing complex ideas and skills. Independent, innovative, and inventive, they can also become preoccupied with their thoughts and imaginary constructs. They become detached, yet high-strung and intense. They typically have problems with eccentricity, nihilism, and isolation. At their Best: visionary pioneers, often ahead of their time, and able to see the world in an entirely new way."

An Investigator wants to be capable of solving the task at hand and be competent in doing so, and fears being useless, helpless, and incapable.

Who is a more celebrated Investigator than Sherlock Holmes? He's the master at handling complex ideas and skillsets. He's innovative, inventive, and independent.

If you have a mystery to solve within your story, look no further than this personality type. "[Loyalists] are the committed, security-oriented type. Reliable, hard-working, responsible, and trustworthy. Excellent 'troubleshooters,' they foresee problems and foster cooperation, but can also become defensive, evasive, and anxious—running on stress while complaining about it. They can be cautious and indecisive, but also reactive, defiant, and rebellious. They typically have problems with self-doubt and suspicion. At their Best: internally stable and self-reliant, courageously championing themselves and others."

They want to have security and support in life, and fear having no guidance or support.

The Narrator of Fight Club can fall under this category, especially because his counterpart, Tyler Durden, is the exact opposite of the Narrator's positive context of this personality. Durden is reactive and defiant, compared with the Narrator's traits of being cautious and indecisive. "[Enthusiasts] are extroverted, optimistic, versatile, and spontaneous. Playful, high-spirited, and practical, they can also misapply their many talents, becoming over-extended, scattered, and undisciplined. They constantly seek new and exciting experiences, but can become distracted and exhausted by staying on the go. They typically have problems with impatience and impulsiveness. At their Best: they focus their talents on worthwhile goals, becoming appreciative, joyous, and satisfied."

This personality type wants nothing more than to be satisfied and content in life. They want to have all of their needs fulfilled and fear being deprived and in pain. Free-spirits like these can be supporting characters used as a way to get the protagonist to loosen up and enjoy life a little, or they can headline a story, giving audiences a chance to live vicariously through them. "[Challengers] are self-confident, strong, and assertive. Protective, resourceful, straight-talking, and decisive, but can also be ego-centric and domineering. [Challengers] feel they must control their environment, especially people, sometimes becoming confrontational and intimidating. They typically have problems with their tempers and with allowing themselves to be vulnerable. At their Best: self- mastering, they use their strength to improve others' lives, becoming heroic, magnanimous, and inspiring."

Challengers want to protect themselves and be in control of their own life and destiny, and fear being controlled and harmed by others. They can challenge the status quo of a cinematic world and inspire those around them, but they are far more effective as antagonists and villains.

Magneto in the X-Men franchise embodies this personality. He's protective of his kind and is very domineering and ego-centric. Considered by most to be a villain, he does use his strength to improve the lives of his fellow mutants — even if Professor X feels that both mutants and humans can live together. "[Peacemakers] are accepting, trusting, and stable. They are usually creative, optimistic, and supportive, but can also be too willing to go along with others to keep the peace. They want everything to go smoothly and be without conflict, but they can also be complacent, simplifying problems and minimizing anything upsetting. They typically have problems with inertia and stubbornness. At their Best: indomitable and all-embracing, they are able to bring people together and heal conflicts."

Harry Potter in the Harry Potter films strives for peace throughout his whole character arc. He's trusting and does everything he can to keep the peace around him and his fellow students. He's the sole individual that brings everyone together in the end, no matter what the odds are against them. Some thinkers have even drawn a connection between Homer's The Odyssey and the Enneagram personalities. According to author Michael J. Goldberg (The 9 Ways of Working: How to Use the Enneagram to Discover Your Natural Strengths and Work More Effectively), Odysseus travels through each of the Enneagram domains in exact reverse numerical order [beginning with type 2 and working counterclockwise around the enneagram]. Here is his itinerary:

2. Calypso, the Two nymph who offers Odysseus every worldly good and even immortality if he will but stay with her.

1. The Phaeacians, perfect Martha Stewart One hosts, where honor, respect, fair play, and courtliness count most, along with beautifully prepared meals.

9. The Land of the Lotus Eaters, dreamy, forgetful Nines.

8. The Cyclops, powerful, vengeful giant Eights; “Each one dwells in his own mountain cave, dealing out rough justice to wife and child, indifferent to what others do.”

7. Aeolia, a Seven island that floats whimsically on the sea, relocating with the wind, where the Seven residents feast and party.

4. The visit to Hades, the psychic underworld. The Sirens, Fours who bewitch passing mariners to tragedy with melodious song.

3. Scylla and Charybdis, a monster and a whirlpool, a rock and a hard place, where skillful sailing full speed ahead is the only way through. The conversion of the precious golden Cattle of the Sun.

Use these nine personality traits to find characters that are right for the stories you want to tell. You can mold and adapt them in many ways, depending upon the needs of your scripts.  Remember that the best characters are those that readers and audiences can empathize with — and what better way to do that than to write from the very personality types we see in society today.