8 Ways Horror Movies Scare the S*** Out of Audiences 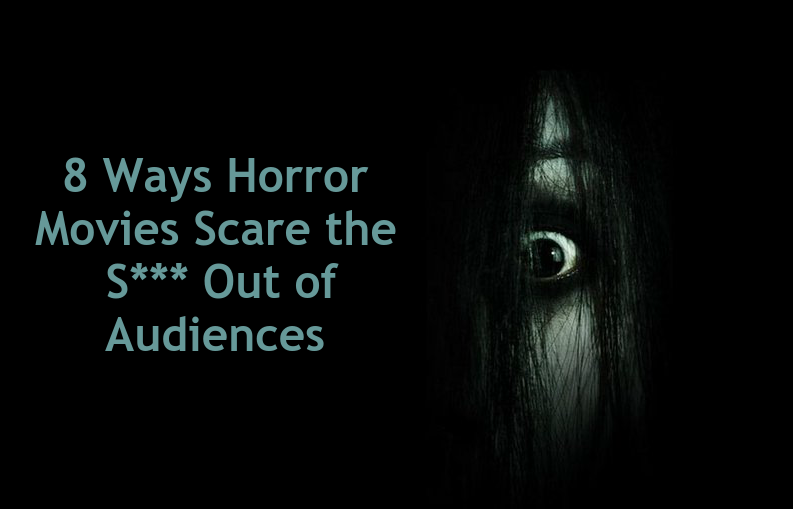 How do horror movies manage to scare audiences so easily?

Humans are a strange bunch. We're curious to a fault at times. We seek thrills by putting our lives in danger as we jump out of airplanes, climb mountains, run away from bulls in chase, plunge off of a bridge with only a single cord to save us, etc.

Others take it down a notch by climbing into roller coasters and other thrill rides found at carnivals, fairs, and amusement parks.

And then there are horror movies.

Audiences flock to them each year. The horror genre is one of the most reliable sources of profit in the eyes of Hollywood and the worldwide film industry as a whole.

But what is it about these movies of violence, terror, carnage, and mayhem that fascinates us? Why do audiences love to be terrified?

Below we will explore some of the horror genre's most horrifying cinematic moments and will break them down by the certain types of horror elements that shock and scare audiences of all ages.

We'll unlock why these scenes and elements are so horrific and why we love them in the end. And from a screenwriter's perspective, you can learn about the psychology of the horror audience and how you can apply that knowledge to best frighten them in your next horror script.

All too often, it's what you don't see that will scare you the most.

Case in point: Jaws. Some call this film a thriller, or more specific, a suspense thriller. But make no mistake, when all is said and done, Jaws is a horror movie. We have a creature from the deep that can approach its victim unseen and often in an unwarranted way.

This sequence encapsulates the magic of the whole film itself. Due to production setbacks and budgetary concerns, Steven Spielberg was forced to show us less, as opposed to more. In hindsight, this proved to be the best thing that could have happened to the film.

Audiences are scared of the unknown. In recent years, with the advent of CG technology, we're all too often seeing more of those scary monsters, killers, or ghosts, to underwhelming effect. Look no further than the failure of Paranormal Activity: The Ghost Dimension.  The whole concept behind this latest installment of the franchise was finally showing audiences the ghosts.

And now compare those obvious CG images of ghosts to these moments from Paranormal Activity 2...

It's hard to argue in favor of the CG.

So, it's clear that what we don't see — the unknown — is more terrifying than what could be showcased before our eyes.

Because we have amazing imaginations. Just imagine, right now as you're reading this, there could be something or someone lurking in the shadows, behind that closed door, or just around the corner.

Perhaps it's silly to some, but our imaginations can run wild with those notions. That moment when you get home and all of the lights are off. That moment when the power has gone out, blanketing you in thick darkness. The unknown is all too often the scariest thing to imagine.

This is perhaps the most widely used element of horror movies. It's when the hero or heroine is creeping through the hallway in terror. Audiences know a scare is coming. They know that there's going to be a loud sound or a creepy visual.

It gives us an adrenaline rush, which is likely why horror movies are so popular and always have been.

Take this scene from the underrated Exorcist III: Legion. It truly is one of the most horrifying movies to behold and this moment of anticipation is a classic example of how to manipulate the audience by building tension through anticipation.

If you haven't seen the movie, all that you need to know is that there is a killer on the loose. A faceless one. No one knows who —or what — the killer really is.

Anticipation is key. Many scoff at the notion of gimmickries like scary music and loud noises, but the fact of the matter is, it works. And even within the context of the script itself, tension can be built using anticipation as a tool.

Anticipation is key for any horror film. It's not enough just to see something scary. You have to build to it and that is what often thrills audience the most.

Imagery is a lasting impression in horror movies. Certain imagery goes home with the audience and often stays with them for days, weeks, months, and sometimes for the rest of their lives.

Look no further than Insidious for one of the more recent terrifying visuals that most still remember.

Or perhaps we keep it old school with one (or two in this case) of the most lasting horrific visuals in the history of cinema, found in The Shining...

Or the heartbreaking and terrifying change of dear Father Karris as the demon Pazuzu possesses him...

Or the WTF moment in The Shining...

Or this cult classic horror moment in John Carpenter's In the Mouth of Madness...

And even some otherwise bad horror movies can become cult classics purely for some horrifying imagery, as is the case with Xtro...

The scary visual is one of the best tools to utilize in horror because that's what stays with the audience in the end.

They have to be odd, shocking, disturbed, or even better, out of place. That's what really resonates with audiences.

When our human minds can't make sense of something, an imprint is often made. The demon in the Insidious scene, the twins in The Shining hotel that is supposed to be empty (as well as the man in a bear suit), the alien creature in Xtro running along a highway at night, and yes, an "old man child" riding a bike in the middle of the night.

Do you have the creeps yet?

There's often nothing more horrifying than the thought of a homicidal maniac or monster chasing you through the night.

This injects adrenaline into the audience's psyche because it goes against our natural survival instincts, and because of the curiosity embedded within our DNA, we wonder what it is like to be that character being chased.

The brilliant Pan's Labyrinth offers a combination of The Visual and The Chase, to utterly terrifying results.

Or this iconic moment from the original The Texas Chainsaw Massacre... can you imagine?

The Chase offers an adrenaline rush that many audience members crave.

That's why they go to horror movies. The rush. No different than those terrible roller coasters. It's a ride that may only last a couple of minutes, if that, but it's one that challenges all of the senses.

The things the characters hear, feel, and see. Audiences live vicariously through those characters in those horrible situations. But the great thing is, they get to walk out of the theater unscathed. Until they walk into their dark homes at night, mind you.

There's something about disfigured humans that mesmerizes audiences, going back to the old carny days complete with "freak" shows. Audiences were both entranced and horrified at the sight and horror movies accomplish that same dual feeling all too often.

Look no further than the likes of inbred rednecks, which has become a subgenre of horror.

And perhaps even more horrifying, a woman named Zelda from Pet Sematary.

An audience's embedded curiosity forces them to gaze at these types of characters, and there's an exhilaration that comes along with that.

When you match those elements to a horror story, it truly does make a lasting impression. How many children or teens from the 80s are still haunted by Zelda?

Phobias are often defined as a persistent, abnormal, or irrational fear of a specific thing or situation that compels one to avoid the feared stimulus. A strong fear, dislike, or aversion.

If there's any place to look to find a great concept for a horror movie or scene that will scare the s*** out of audiences, surely phobias are the place to look.

Nyctophobia? The fear of the dark.

Pteromerhanophobia? The fear of flying.

Somniphobia? The fear of sleep.

Trypanophobia? The fear of needles.

Phobias are the most direct route to the audience's psyche.

The more common the phobia, the more audience members you will scare instantly without too much effort. And when you explore fringe phobias, those that aren't as common as others, you offer the unique opportunity of introducing a new fear to them.

The Overlook Hotel is perhaps the most iconic haunted location of any movie.

The Haunted House is a tried and true location that has been utilized hundreds of times, but none as successful and iconic as the one that can be found in a little town called Amityville.

And who can forget the endless woods in The Blair Witch Project?

Or the former insane asylum in the underrated Session 9, which was the key to most of the horror felt within the movie?

Whether it's a ghost, alien, demon, deranged killer, creature, or anything else that horror writers have conjured, they're all monsters. And a horror film is only as good as its monster.

Back in the golden age of classic Hollywood horror, the Universal monsters were all the rage.

In the late 70s and into the 80s, the Slasher monsters dominated the genre.

The 2000s have given us a plethora of ghosts, demons, and zombies.

Whatever the monster may be, they are key to the success of any given horror movie.

Audiences love to hate them.

The monsters can be embedded in realism, supernatural, mythical, of this earth or beyond it. But they have to be terrifying. They have to pull those strings of fear, tension, and anxiety. They have to unleash those primal instincts of survival within the audience.

These are the eight ways horror movies have scared the s*** out of audiences for decades.

The fear of the unknown. The anticipation of what is around that next corner or in those dark shadows. The horrifying visuals that are embedded into our minds, especially on those lonely dark nights. The terrifying feeling of being chased by something or someone of unspeakable horror. The disfigured beings that haunt our nightmares. The presentations of phobias that have kept us up at nights. The locations that we never want to find ourselves in. And yes, the monsters that stalk, terrorize, haunt, and kill.

If there were ever a secret recipe for cinematic horror, these would be the eight key ingredients.

Read ScreenCraft's 66 Terrifying Screenplays That Will Keep You Up at Night!