Three Reasons Why You Should Write Your First Draft by Hand Nathalie is a story fabricator and creative nomad who founded mentorless.com, a blog for filmmakers and storytellers to nurture their skills and craft. She also offers The Creative Break, helping writers to reconnect with their mojo and stretch their creative muscle. You can connect with Nathalie on Twitter at @mentorless where she hangs out during virtual breaks.

Go back to writing.

I changed my phone’s wallpaper to make sure I would literally go back to writing instead of checking my notifications.

I had planned to write a feature screenplay I had been thinking about for three years, and I couldn’t help but check my phone all of the time. I do check my phone a lot. So much so that after a few days, I stopped seeing my phone’s wallpaper and went back on forgetting for hours that I should go back to writing. Ha. Hashtag catch22. And then I made one single decision that helped me complete a first draft in 10 days: I decided to write it by hand.

Blown away by the results, I did some digging and discovered that there were many reasons why writing by hand is such a powerful tool and why all of the Final Drafts, Words, and Scriveners would never compete against the power of a pen and a paper when it came to your first draft.

Scientifics from Berkley and UCLA even published a paper back in 2014 demonstrating that the pen is mightier than the keyboard, so even if you don’t care about reasons 1 to 3 below, it is scientifically proven that holding a pen triggers much more connections in your brain than typing on a keyboard.

1. Write by Hand to Unleash the Adventurer in You

“Writing is a lonely job. Even if a writer socializes regularly, when he gets down to the real business of his life, it is he and his type writer or word processor. No one else is or can be involved in the matter.”

Today, you can partially break this feeling of isolation by taking your laptop down to the closest coffee shop and tagging along with a cloud of screenwriters working their way through The Hero’s Journey. But if the time to be isolated with your virtual blank page on your computer is unavoidable, the first draft is a great opportunity to unleash the adventurer in you.

Instead of staying still with your computer, grab a notebook and a pen and go… anywhere.

When you write by hand, you don’t need to worry about battery life, cold weather, too much sun on your screen, or having a flat surface to put your laptop on.

When you write by hand, you can take your body and your imagination wherever you want, on long walks, at the supermarket, on a rooftop, at the museum, or even at the movies of all places. If inspiration strikes, you can write, immediately, without worry, standing or sitting, crunched in a bus or looking at the sea.

2. Write by Hand to Shut Down the Editor in You

“I bought a fountain pen and a big notebook and wrote it by hand to find out how writing by hand changed my head.  And it did, it really did. I was sparser, I would think my way through a sentence further, I would write less, in a good way. And when I typed it up, it became a very real second draft — things would vanish or change.”

Just like Neil Gaiman , I discovered that the second great benefit of writing by hand is that it shuts down your editor’s mind.

I remember that not only would I not get distracted by words underlined in red or the temptation of googling whatever I felt needed to be immediately confirmed, but that I also wasn’t even remotely attracted to re-reading what I had written down earlier.

I would read the last paragraph and jump back into writing the next scene. No scrolling. No word search. Just a very real page and a very real pen. What that also means is that when you are done with your handwritten first draft, you can wear your editor’s hat while you type everything back onto Final Draft, and that becomes your second draft.

3. Write by Hand to Focus on Your Story

To write my first draft, I picked a cheap and ugly notebook so I wouldn’t be intimated and I wouldn’t feel obliged to write an amazing story right away. Although I tried to loosely follow the screenplay format on the notebook page, I let go of trying to know how many “screenplay pages” I had actually written at the end of each session.

The clear benefit was that instead of focusing on beats to hit, I was focusing on the story that I felt needed to be told.

Because it’s a first draft, this is exactly what the focus should be on. Hitting the right beats comes later, during refinement phases. But first you need to tell the story that needs to come out. 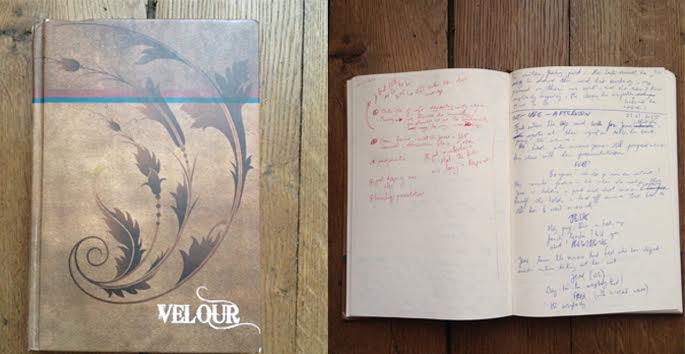 Left: the cover of my very ugly notebook. Right: my handwritten first draft. I was only writing on the right page, so whenever a note popped up in my head, I could write it on the left page and make sure I would see it when typing everything back on the computer for the second draft.

Unleashing the adventurer in you, shutting down the editor’s voice, and focusing on your story instead of focusing on formatting and beats, those are three major reasons why you might want to consider writing your next first draft by hand.

Have you ever written a first draft by hand? I would love to hear about your experience below!