The 9 Elements of All Great Rom-Coms 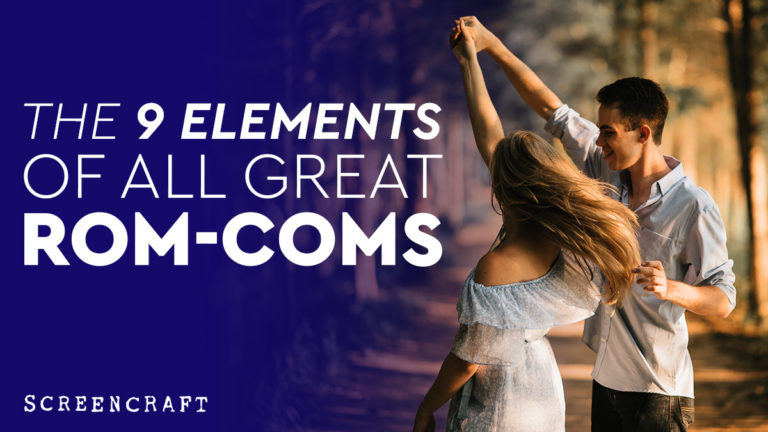 Screenwriters never fail to find new ways to prove romantic cliches — opposites attract, don’t judge a book by its cover, all’s fair in love and war, head over heels in love. Anything’s fair game in rom-coms, but anyone gearing up to write the next When Harry Met Sally…, 50 First Dates, or The Proposal must know these nine elements critical for those scripts that combine love and comedy.

Romantic comedies hinge on one crucial element: two completely lovable characters. By their very nature, rom-coms center around a romantic couple. And no matter the stakes, situation, or scenery, the audience has to root for those two characters. Whether it’s the idiosyncratic Harry and peppy Sally (When Harry Met Sally…), girl boss Charlotte Field and unfiltered Fred Flarsky (Long Shot), or awkward Tim and bookworm Mary (About Time), the central couple provides the backbone to every great rom-com.

Essential to the basic plot of every romantic comedy is the moment the characters meet — AKA: the meet-cute. This is the amusing, clever, charming, or utterly disastrous way that the two lead characters are introduced to one another. And since meet-cutes are so important to modern rom-coms, screenwriters must come up with an original interaction to serve as the genesis for their love story.

Maybe it’s a blind date at a pitch-black restaurant (About Time) or an 18-hour car ride to New York City (When Harry Met Sally…). Maybe it’s even an off-handed comment about a band in the office elevator (500 Days of Summer). Regardless of the meet-cute mechanics, if the two main characters don’t meet, there’s no story.

While you could argue that not every romantic comedy has a meet-cute — and you’d be right — I would counter that all rom-coms have some kind of “first meeting” moment, even if that’s simply the first time the audience meets the lovebirds in question.

The couple may take center stage, but there has to be a good, interesting reason for them to be there in the first place.

In The Proposal, it’s the fact that Margaret basically blackmails her assistant into being her fiancé so she doesn’t get deported back to Canada. In Palm Springs, it’s that Nyles and Sarah are the only two people stuck in an infuriating time loop, and in You’ve Got Mail it’s that Joe owns a bookstore threatening to put Kathleen’s shop out of business.

Or take the unique, oddball situation in The Big Sick, in which charming Emily spends the majority of the story in a coma while comedian Kumail gets to know her parents before their relationship has even truly begun.

Call it a complication, a troublesome situation, or set of intricate stakes, no matter the nomenclature there has to be something that pushes your characters together and pulls them apart (literally or figuratively), something that puts their relationship to the test.

At Least One Great Sidekick

There’s a reason everyone knows which animated Disney animal sidekick they’re most like. Oh… just me? Well, Disney knows what they’re doing because every great rom-com requires an incredible sidekick (or two).

There’s unfalteringly loyal Marie in When Harry Met Sally…, hilarious Ula or always-flexing Doug in 50 First Dates, and purple-loving Kit Kat in About Time. Your main characters must be lovable, but your side characters have to be absolutely unforgettable.

One of the components of screenwriter and producer Blake Snyder’s “Save the Cat!” beat sheet is the Fun and Games section, which provides the promise of the premise, or, in other words, the essence of the movie. In romantic comedies, the Fun and Games equivalent is what I’ve dubbed the “super fun montage.”

In the super fun montage, the main characters get to know one another, spend a ton of time together, and/or fall madly in love. It’s when Henry spends day after day coming up with creative ways to meet Lucy on the side of the road (50 First Dates), or when Charlotte Field and Fred Flarsky are traveling around the world and asking one another colorful questions in equally colorful foreign cities (Long Shot). This section typically comes at the beginning of Act Two, when the plot is ramping up but the stakes still aren’t too high. It’s, as you’d expect, always super fun.

A key scene in every romantic comedy is the moment the core relationship is put to the test, pushed so far to the limits that everything is in jeopardy of falling apart. The main characters might be in love, but their path to happily ever after might just end in a fiery crash.

Take Tim, who travels back in time and accidentally misses the moment when he met the love of his life in About Time, or the heartbreaking scene when Lucy basically forces Henry to help her erase him from her memory in 50 First Dates. The screenwriter’s biggest challenge is driving the core relationship right over a cliff and somehow devising a way for the main characters to escape the wreckage unscathed. No easy task, but an absolutely essential one.

While the characters may not be struck with a new idea, per se, the moment of realization is crucial to any film in the rom-com genre.

This is when Harry realizes he should be with Sally. It’s the moment Mel’s hand falters and she can’t bring herself to sign the divorce papers in Sweet Home Alabama. It’s when Pat goes running after Tiffany in Silver Linings Playbook, and Cal’s big, impromptu speech at Robbie’s graduation in Crazy, Stupid, Love.

A Grand Gesture or Epic Line

Though they take a variety of forms, every romantic comedy requires at least one big moment or epic line of dialogue that inevitably makes it into the movie trailer. Imagine Cal building that windmill in the backyard to win Emily back from David Lindhagen (Crazy, Stupid, Love). Think of Nick following Rachel onto the airplane and proposing in the aisle back in coach (Crazy Rich Asians). Or remember Harry running through the streets of New York City on New Year’s Eve to profess his love for Sally. If you write a rom-com and don’t include the grand gesture or incredible romantic line, did you even write a rom-com?

Whether the couple finally admits their feelings for each other, starts dating, gets hitched, says “I do,” or finds a different kind of happy ending, a happily ever after is a staple of all romantic comedies.

Of course, there are always exceptions to the rules — 500 Days of Summer doesn’t have a strictly happy ending; Someone Great is more about friendship than romance; Crazy, Stupid, Love has an entire ensemble instead of two main characters. But screenwriters hoping to write the next unforgettable romantic comedy should keep the rules of the rom-com and our hearts intact before trying to defy the odds. 10 Pieces of Screenwriting Wisdom from Taika Waititi
X
Screenwriting Newsletter
Join our community of over 100,000 screenwriters and get weekly inspiration delivered to your inbox: