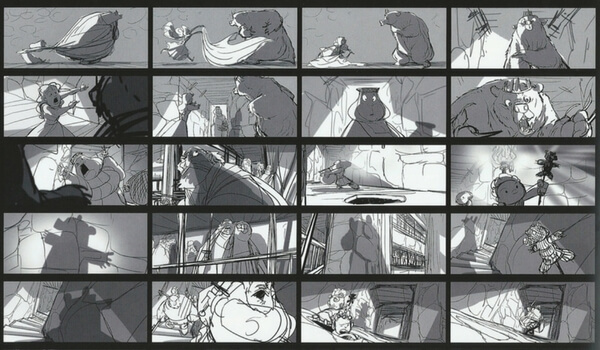 Storyboarding originated in the animation field, which makes sense since it’s a way of visualizing a story with a series of drawings. A storyboard is essentially a series of frames which feature drawings representing a film's sequence of events. Think of it like a comic book of the film. A storyboard provides a visual layout of events as they are to be seen through the camera lens.

The storyboarding process was developed at Walt Disney Productions during the early 1930’s, after several years of similar processes being in use at Disney and other animation studios.

Today storyboarding is commonly used as a way of planning for a production (whether animated or otherwise). In the storyboarding phase, things like camera angle, type of shot, and blocking of characters are decided.

Storyboarding for screenwriters (and novelists)

A version of storyboarding is becoming more popular with screenwriters and novelists. Storyboards are useful for writers because they allow for visualizing a story’s progression, as well as experimenting with plotting and event sequence. Changes in storyline can be quickly tested for effectiveness, to see which choices evoke stronger reactions or interest.

While a storyboard created for production will look very different from a writer’s storyboard, the infographic below offers some practical advice on storyboarding basics that can be applied for any purpose. It’s yet another handy tool to add to your storytelling arsenal.