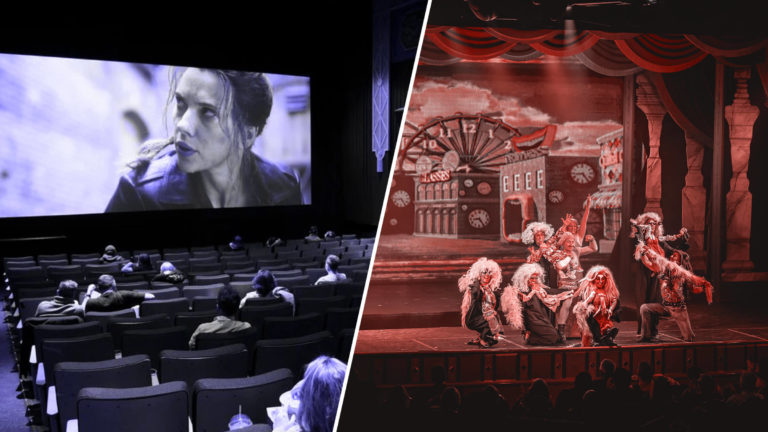 Many of our favorite screenwriters started out as playwrights: Aaron Sorkin (A Few Good Men, The Social Network), David Mamet (Glengarry Glen Ross, American Buffalo), and Mike Leigh (Happy-Go-Lucky, Secrets & Lies), to name a few. Their successful transition from theater to film makes sense, considering in both theater and film, writers create stories to be told by actors and watched by an audience.

But a great play doesn’t necessarily make a great movie and vice versa. In fact, some stories are really meant to be told by actors live on stage, while other stories are only achievable on film. To understand why, we need to look at the differences between the two mediums. If you are a writer trying to decide which medium best suits your story, let this list serve as a guide.

Scope and Scale of the Story

If you have a story idea and you’re trying to figure out if it’s best told as a stage play or a screenplay, think about the scope and scale of the actual story. Is it an epic World War II film with lots of action that takes place in the air, sea, and on land, like in the movie Dunkirk, or is it an intimate, family drama set in one confined space, like an attic in The Diary of Anne Frank? Both stories are set during the same war, but they offer two very different experiences. Dunkirk is highly visual, exciting sonically with lots of special effects making it highly suited for the cinematic experience. The Diary of Anne Frank is expressly quiet and intimate, making it a great experience for live theater.

Screenplays are typically for large-scale stories, set in many locations, where the images, sounds, and action all really help tell the story. Plays are generally small and intimate, told in and around a central location, with dialogue guiding the story.

The general rule in writing a screenplay is to “show, don’t tell,” meaning screenwriters try as often as possible to let an image communicate an idea. In a film, you’ll typically see a plane crash or a boat sink rather than one character telling another that a plane crashed or a boat sank. Actually seeing a plane crash is much more dramatic than hearing about it. Movies also include montages, or a series of images edited together to help the audience process a lot of information in a very short amount of time. Montages usually do not contain dialogue.

In a play, dialogue is king. In this medium, characters use words to communicate their wants, dreams, manipulations, and frustrations. They will often rant, argue and even break into monologues or soliloquies. This is necessary because, unless you’re lucky enough to sit in the front row, it may be difficult to read the actors’ subtle facial expressions or body language. In film, the magic of a close-up often tells you everything you need to know, making words obsolete. Also in plays, the dialogue can be highly stylized with characters speaking in sophisticated, rhythmic language, even poetry in the case of Shakespeare.

Stage plays are dialogue-driven, while screenplays rely on images to tell the story and express character. As the writer, try to determine if your story can be told with mostly visuals, or if dialogue is the most important story-telling device.

Due to the nature of plays being live, physical productions where stagehands have just a matter of seconds to change out the scenery between scenes, very limited locations are the norm. It’s also less expensive to have fewer locations and plays typically have much smaller budgets than movies. The use of a “black box” type of theater, where the walls are painted black and there are very few set dressings (like in Our Town by Thornton Wilder), is a clever cheat to help the audience imagine different locations.

Screenplays can jump from location to location, and with big blockbuster films like the recent Black Widow, film audiences expect to be dazzled by a car chase in Budapest or a climax at the mysterious Russian spy-training facility called the Red Room.

Due to budget, space, and time limitations, plays are generally set in a handful of locations, but screenplays can be set all over the world – and even all over the universe. Where does your imagination take you?

Just like locations, stage plays favor fewer actors. Remember that plays are trying to plunge the depths of a character’s psyche, so the fewer characters, the deeper the playwright can go.

Screenplays typically have much larger casts, along with “extras” or “background actors” to fill out the many locations and make sets like a bustling train station feel authentic.

With fewer actors in a play, there’s more time to reveal character. Movies may have many characters because they use images as a type of shorthand to reveal what makes them tick.

Most stage plays have two acts with an intermission in the middle. The end of the first act usually has some type of major turning point or information reveal intended to hook the audience to return to their seat after their bathroom break. Recently, however, there’s a trend with many newer plays to be performed without an intermission if the length of the play is 75 minutes or less. Shakespeare plays are separated into five acts.

Hollywood screenplays have three acts and movies are intended to be viewed without an intermission.

The theater allows for more wiggle room for the number of acts; Hollywood movies will have three.

Screenplays are formatted to provide approximately one minute of screen time per page, so a 120-page screenplay will roughly translate to a two-hour film. Descriptions of action are to be kept brief, one to three sentences. Act breaks are not designated on the page (this can be different in TV scripts, where the act breaks are often, but not always, noted on the page).

Plays are formatted slightly differently, often with large chunks of dialogue, and detailed descriptions of settings and action. Also, immediately following the title page, plays include a “Dramatis Personae Page” or “Cast of Characters” page with detailed character descriptions. Acts and scene numbers are designated on the page. Click here to see an excellent description of proper play formatting. A stage play is meant to be performed by the actors exactly as it is written. Actors and directors may not change any dialogue or improvise lines. What the playwright has written is said to be “set in stone.”

Screenplays, however, are more like blueprints, and given that film is a highly collaborative medium, it will go through many changes and rewrites (often not by the original screenwriter) before shooting begins (and sometimes after!).

If you’re a person who likes to have complete creative control, writing a stage play might be the best option for you. If you’re very collaborative, a screenplay is the way to go.

Are there any other important differences that we missed? Let us know down in the comments! 2021 ScreenCraft Sci-Fi & Fantasy Screenplay Competition Winners
X
Screenwriting Newsletter
Join our community of over 100,000 screenwriters and get weekly inspiration delivered to your inbox: