Are you formatting your screenwriting scene headings correctly within your script? We're going to explore that question here for this installment of our ongoing Screenwriting Basics series.

Some screenwriters will scoff at the mention of proper screenwriting format — dismissing it as nothing more than academic nitpicking. It's understandable because the produced screenplays most have read are usually inconsistent in the formatting that is used.

Screenplays that you find online offer a plethora of different scripts written in different eras by different writers within the context of different production directives (indie productions versus studio productions). Some scripts are written by studio writers under assignment. Others are written by auteurs that are going to be directing their own work (Quentin Tarantino, Paul Thomas Anderson, etc.).

Amidst this formatting divide lies one of the most commonly misformatted elements in a screenplay — the scene heading.

So let's go back to the basics once again and clear up the scene heading issue once and for all.

Sluglines Are Not Scene Headings

These two terms are often intertwined and incorrectly referenced.

Scene headings are the general location headings that detail where we are in the script — outside or inside (EXT. or INT.) and at which LOCATION — and whether or not the reader is to envision daylight or darkness (DAY or NIGHT). It's that simple.

Sluglines are instances within the scene description where you use CAPS to identify information that you want to call attention to.

Sluglines are not scene headings. They are two different screenplay format elements altogether.

Working on a new feature, pilot, or short?  Use our helpful eCourses and get it done faster! 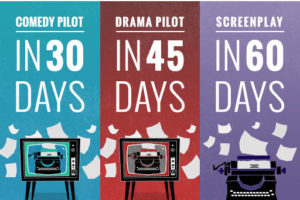 What Elements Should NOT Be in Scene Headings?

We've established that scene headings consist of three elements — interior or exterior, location, and day or night. But so many screenwriters seem to want to push that content even further by adding dates and times. Some also use commas to establish secondary locations.

Below are examples of elements that should not be in scene headings.

All dates and times need to be communicated within the scene description, preferably in the opening line after the heading.

Commas should never be used within the scene heading format either. Some writers use this to specify secondary locations within the primary location. Some even use the word ESTABLISHING to make sure that we know this is the first time we've seen this important location (we know already). These elements aren't necessary. There's a much more straightforward way to communicate these elements.

Master scene headings offer the core location that any given scene is in, be it a house, bar, stadium, car, train, plane, or office building. Within those master locations are secondary locations that characters may move to, including places like kitchens, bathrooms, and bedrooms. 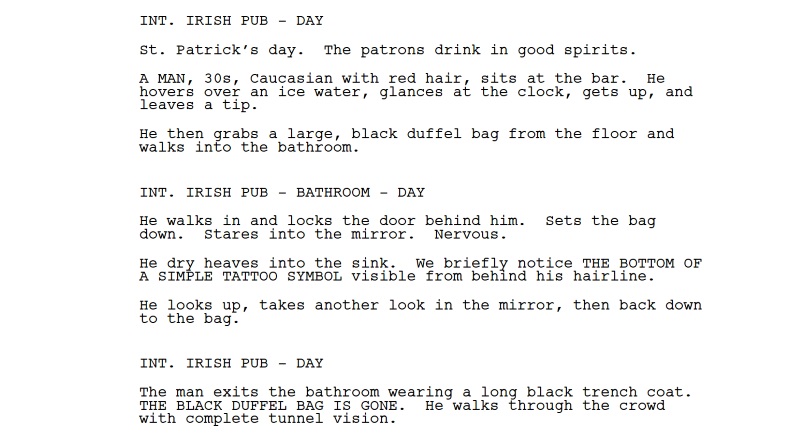 As you can see, the IRISH PUB is the master location and is established within the first scene heading. The very next location is written as a secondary by adding two dashes and showcasing a BATHROOM that is within the IRISH PUB.

If the next scene heading, after the IRISH PUB has been established, was INT. BATHROOM - DAY, that BATHROOM could have been in any other location. By writing it as a secondary heading with the inclusion of the already established master location (IRISH PUB) before it, the writer is communicating to the reader that this bathroom is indeed within the location that had already been presented — thus it offers a more natural visual transition for the reader to envision. It's all about the specification.

And you don't even have to establish the master location first. You could open with the specific INT. IRISH PUB - BATHROOM - DAY as long as the IRISH PUB is featured eventually. This type of usage is better implemented when establishing character houses and other character-specific locations (INT. JANE'S HOUSE - BEDROOM - DAY). An alternative to that would be INT. JANE'S BEDROOM - DAY, but if you're going to feature other locations within Jane's house, it's best to mention the master location within the secondary scene heading.

Another mistake many screenwriters make within scene headings is being overly specific.

What About Using CONTINUOUS or SAME?

You could undoubtedly rewrite the second and third scene headings from the example above and include CONTINUOUS in place of DAY, which would denote that the character is going in and out of these locations in real time. Thus it's a continuous transition between locations. However, many screenwriters overuse CONTINUOUS — and even more don't understand what the proper usage of it is. It can be frustrating for a reader.

The better option is to use SAME, denoting that these actions of the character entering and leaving are happening at the same time, but even then it's beginning to fall into overwriting or overly busy formatting territory.

Merely using DAY with all three of the headings is more straightforward, especially when the brief scene description is giving the reader the explanation they need.

Simple is always the best option.

What About EVENING, MORNING, DUSK, DAWN, and LATER?

This is a highly debated topic. While evening, morning, dusk, and dawn could reference a specific look and feel of the surrounding environment — and also reference a time of day — the visuals are so vague. EVENING can be both day and night, visually. As could DUSK or DAWN.

A natural deciding factor is always to keep things simple. DAY or NIGHT is always more specific for the visual, and you can then use a line of scene description after to specify the time and atmosphere.

If you still feel that you need to use one of those alternatives, make sure that your specific mention of them is essential to the story. If you're writing a vampire flick, you're obviously going to use DUSK or DAWN at some point as a dramatic tool. If EVENING or MORNING are used with specific purpose, then go with it.

LATER is used when you're in the same location with the same character(s) and want the reader to see that time has passed with no cut to any other location. It's often best to break up those types of scenes by moving to another location — if not just briefly — but if you have to stay there, LATER is an option as long as it's not overused.

With a script like Buried, which tells the story of a character trapped in a single location (casket), then yes, LATER is something you'll want to utilize. But keeping it simple by using DAY or NIGHT is always the best option — primarily because there's an even more important reason to keep those scene headings uniform.

When the script goes to pre-production personnel, screenwriting software uses the format of the scene headings to break down the script into reports for locations and scheduling (DAY or NIGHT shoots). If you're not using the proper scene heading format, the reports can turn into frustrating additional work for the line producer and their team.

Some of you may scream, "Come on! Most spec scripts don't even get produced! This is nothing more than a sample for possible assignments. Everyone knows that! So exact formatting isn't necessary. The reader will get it."

Well, if you want to be a professional screenwriter that writes on assignment, you probably want to know how to write a solid final draft for production, right?

"But the Produced Scripts I've Read..."

It doesn't matter. As an undiscovered screenwriter writing on spec, you generally have to abide by more strict industry guidelines and expectations.

Beyond that, it's just about offering the reader the best possible read. The more simple, straightforward, and consistent the scene headings are (along with the rest of the formatting elements), the better that read is going to be.

Overly busy and inconsistent format is a reader's worst nightmare. When you write simple scene headings — master scene headings and secondary scene headings in particular — it's easier for the reader to process the information within a millisecond so they can go onto the scene description and have a feel for how your stories unfold within the context of cinematic vision.