Learn how to write narration and voiceover like a pro.

Are you hearing voices?

Don’t worry, it’s probably just some good ‘ole Narration. And by the end of this article, you’ll know everything there is to know about Narration and Voiceover, I’m sure of it...

*Omniscient Narrator: She isn’t sure at all, folks. The best she can do is hope.

So, let's dive right into this plot device -- how it works, how to use it, and how to avoid its many cliché pitfalls. But first, what's a plot device?

Plot devices are storytelling tools or narrative techniques that writers can use to impact their stories.

What Exactly Are Narration and Voiceover?

To help untangle this, let’s look at some dictionary definitions from our friends at Merriam-Webster.

It gets especially confusing because Narration in movies and TV is almost always Voiceover Narration (meaning it’s words voiced over another visual). But Voiceover can just be Voiceover.

To make it even more confusing, these words have vastly different meanings depending on the industry — advertising, movie marketing, podcasting, and radio producers all use these same terms to mean slightly different things.

For our purposes (movies and TV shows), think of it like this: if you can hear a character or narrator speaking, but you cannot see them saying those words aloud on the screen, it’s Narration or Voiceover.

Before we move on, I will concede that even though they’re not *technically* the same thing in function, it doesn’t matter when it comes to what’s written in the script. Regardless of whether you’re using Narration or Voiceover, you type the same two letters after your character name — V.O.

So yes, in a sense it’s all Voiceover. But writers should think about how the Narration or Voiceover is functioning within their story before they write those two little letters.

So, What’s the Difference?

Many creatives use the terms “Narration” and “Voiceover” interchangeably, and, given the definitions above, who could blame them? They seem like essentially the same thing.

Anytime a character’s voice from one scene is put over another scene, it’s Voiceover.

In this way, Voiceover functions as a handy filmmaking technique — instead of showing two scenes back-to-back, one in which a character explains an incident and another in which we see that incident, Voiceover makes it possible to smash those two scenes together. It’s a way of utilizing the medium of filmmaking to expedite storytelling.

But Narration is a little different. Since Narration is the telling of a story, those movies and shows that feature Narration typically have someone functioning as a Narrator.

Novels can be written in first-person, third-person limited, or third-person omniscient point-of-view, and likewise, film and TV Narrators can be involved directly or indirectly in a story.

To see what I mean, check out these examples of varying levels of Narrator involvement:

All of these examples are Voiceover Narration, meaning that there is a Narrator voicing a story over other images.

Try to remember the distinction like this — True Voiceover has an on-screen counterpart that appears somewhere in the course of the story. True Narration, on the other hand, is more internal or thematic and is often woven into the narrative structure of a piece. Voiceover Narration is a bit of both.

When you’re watching a movie, there are certain elements that exist in the world of the story and others that exist solely for you, the viewer.

The easiest way to understand the difference is to think about music and sound. While the characters in a story can hear music playing in a restaurant (Diegetic), they cannot hear the movie’s score that has been added in post-production (Non-Diegetic).

Using the same logic, Narration and Voiceover can be either Diegetic or Non-Diegetic.

If the Voiceover or Narration has some kind of on-screen, in-world source it can be traced back to, it’s Diegetic.

In these cases, whether the person speaking is a character in the story or a third-party narrator, the voice is disembodied. For example, there is Narration from the main character in About Time, but we never see him speak any of this Narration on-screen, nor do any of the other characters hear it in any way. It’s completely non-diegetic.

Sometimes the distinction between diegetic or non-diegetic is left up in the air for the majority of the story. In the first season of Bloodline, John Rayburn leads the audience through most of the episodes with Non-Diegetic Narration about what happened with his brother Danny. Only in the final episode of the season is it revealed that this Narration is actually a Diegetic speech John is giving over a campaign dinner in his bid for Sheriff.

While the distinction between Diegetic and Non-Diegetic might not seem too important when taken at face value, it’s critical to think about how a narrative technique like Narration or Voiceover will function within your story.

Now that you’re an expert in Voiceover and Narration, let’s take an in-depth example.

In this movie, an unnamed main character (played by Ed Norton) serves as the Narrator. He tells the story of how he met an enigmatic soap salesman named Tyler Durden (played by Brad Pitt), started a fight club, and became embroiled in an anti-corporate organization causing chaos around the city.

The big twist of the movie — in case you haven’t seen it — is that Tyler Durden doesn’t exist. He and the Narrator are the same person.

And the reason that twist works so well is because of the Non-Diegetic Voiceover Narration throughout the movie.

When you watch Fight Club, you’re treated to an almost non-stop stream of Voiceover Narration from the unnamed Narrator. He goes on and on about his horrible white-collar job, his disdain for consumerist culture, his persistent insomnia, and his growing confusion about the overall objective of Project Mayhem.

Because audiences are prone to thinking that Narrators who speak directly to them are inherently trustworthy, the screenwriter is able to subvert those expectations by having Fight Club’s main character be incredibly unreliable. Now, for the most part, we don’t see the Narrator speak this Narration aloud on-screen, which would imply that it’s Non-Diegetic Voiceover Narration — internal Narration voiced over the movie’s images that has no in-world source. The fact that none of the other characters in Fight Club hear this Narration is only further evidence.

However, there is one scene that throws everything up in the air.

Not only does the Narrator break the fourth wall in this scene and talk directly to the audience about Tyler’s professional life, but Tyler himself interrupts the Narrator’s explanation and acknowledges the presence of the external audience.

At the end of the day, it really doesn’t matter. I am Jack’s Voiceover Narration and Fight Club is a great example of a movie that cannot be separated from its plot device.

Other Movies and Shows With Voiceover or Narration

How to Use Narration and Voiceover in Your Story

The age-old, stereotypical advice about Voiceover and Narration is to never use them. But, like with many plot devices, Narration and Voiceover can actually make good stories even greater, if you use them effectively, of course.

Before you type those two little letters, consider these questions…

How is the Narration/Voiceover Functioning Within the Story?

Does the Voiceover have an on-screen source at some point in the story? Is the Narration woven into the structure of the story itself? Is it a bit of both?

Regardless, make sure you have a clear idea of how the Narration or Voiceover will function within the story before you start writing.

Are you using Narration to convey inner thoughts, feelings, or emotions? Is it a purely technical function to show a more interesting scene while a character tells a story? Or maybe an on-screen narrator provides expository information crucial to the story that the audience won’t get any other way.

The information provided by the Narration or Voiceover should be something the audience cannot get otherwise. If you could get the same info from something on-screen, you probably don’t need to use this plot device.

Am I Telling Something I Should Be Showing?

Film is a medium of show, don’t tell, a rule more relevant than ever when it comes to Narration and Voiceover. In general, if the information you’re trying to convey to the audience could be shown through on-screen action or dialogue, it’s probably best to nix the Voiceover or Narration.

Am I Using the Voiceover or Narration as a Crutch?

The biggest issue with this plot device is that writers tend to use it as a crutch. Instead of finding ways to externalize their story for the audience to see on-screen, insecure writers head straight to V.O. and have their characters spell things out for the audience.

This is how Voiceover Narration gets a bad rap — if you’re using this plot device to take the easy way out, it’ll come across as lazy screenwriting. And who on earth wants that?

Does the V.O. Make the Story Better?

When it comes to Voiceover and Narration, I don’t think the relevant question is whether or not you could remove the Voiceover and still have the story make sense.

But there are plenty of examples in which you could take the Voiceover Narration out and the narrative still holds up. In my opinion, if your story has enough stability to stand up on its own, that’s the sign of a great story. But sometimes Voiceover Narration adds something thematic, something special, to a story that actually makes it better

Would About Time work without Tim’s Narration? Would the ending of The Shawshank Redemption still hit home without Red’s? Yes… but they just wouldn’t be the same. And that’s the sign of great Voiceover Narration.

Whether you’re using an omniscient narrator or simply cutting to another scene while a character is talking, Voiceover and Narration are critical storytelling devices every writer must understand.

Now, as the Narrator of this article, I have to insist you stop reading this article and get back to writing immediately. 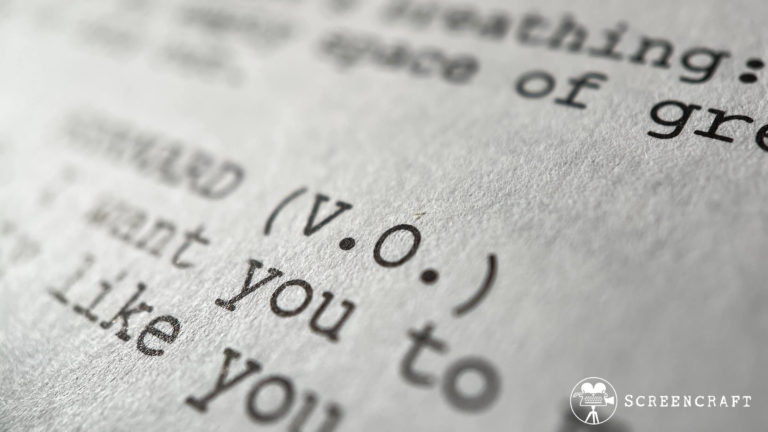 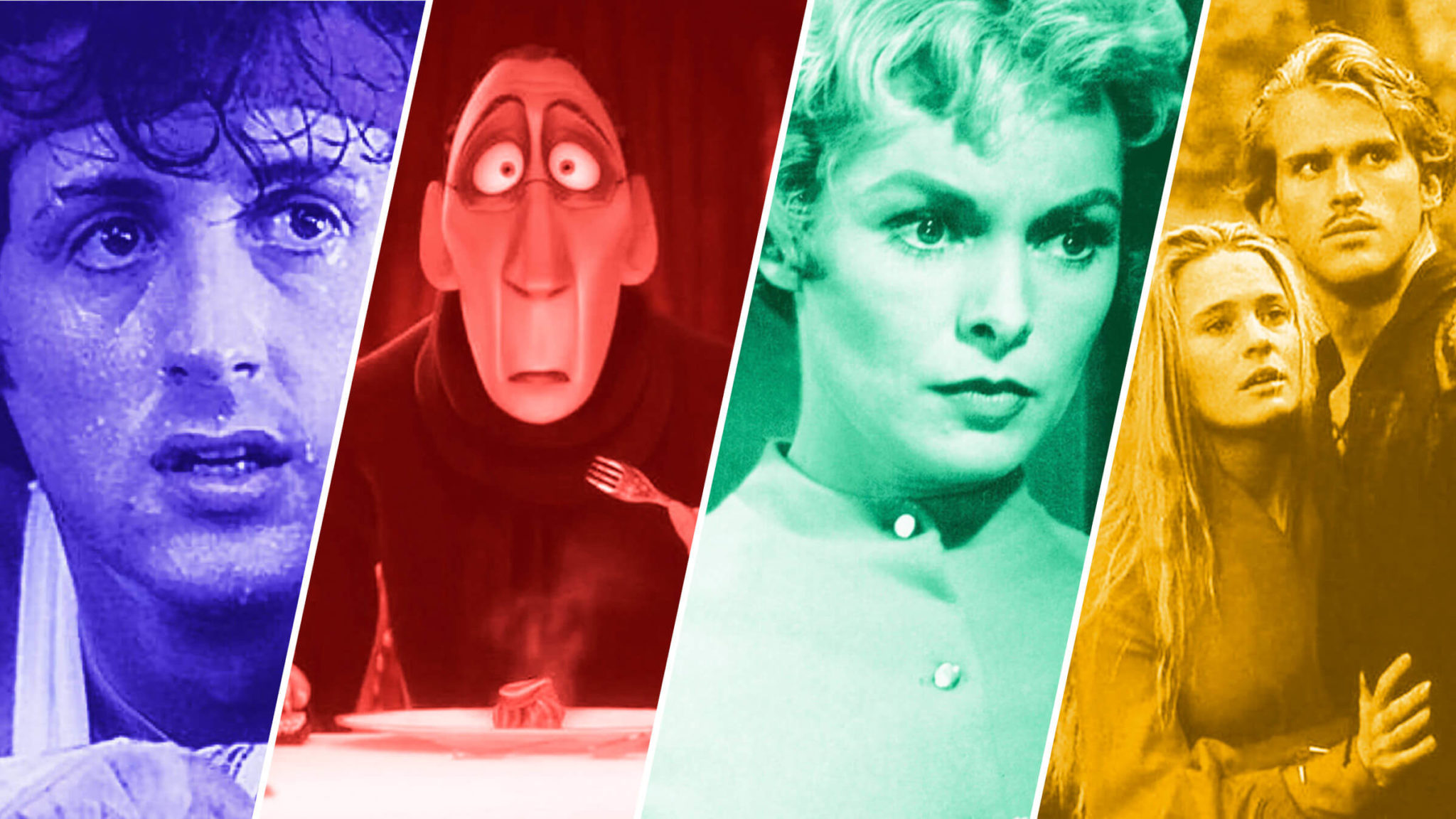