Screenplay Format: 6 Elements You Have to Get Right

Whether you're an aspiring writer or a seasoned vet, knowing the industry-standard feature screenplay format is essential.
by ScreenCraft - updated on December 8, 2022 Reading a screenplay is not like reading a book, where you just read from left to right, top to bottom. Being able to know where scenes take place, which characters are speaking, how they're speaking, and what's going on around them is key for reading scripts, which means that your screenplay format becomes uniquely important to anyone who reads your work — especially agents, managers, executives, and other industry pros that can help launch your career.

Here are six screenplay format elements you really have to get right if you want to avoid getting your masterpiece thrown in the trash.

If you are writing a feature film script that you want a professional producer or development executive to take seriously, then you need to be writing in the Master Scene Format. 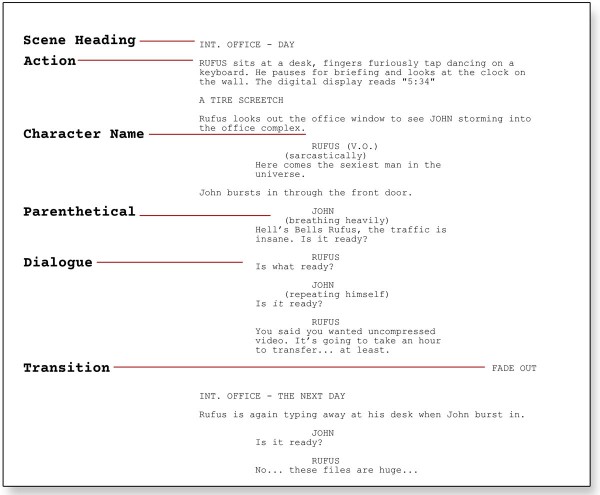 The first formatting element is the scene heading – also dubbed the slug line. Screenplays written in the master scene format are broken into scenes, not cuts. The scene headings are written in all caps and INT or EXT for Interior or exterior. This is followed by the name of the location and a designation of day or night.

The next element is action. This should describe action that can be seen or heard.  Sounds Effects that are important to the story but are heard off-screen need to be in ALL-CAPS.

Next, we have Character name. This has its own line in ALL caps. A character who is off-screen or speaking in voiceover should be designated by O.S. or V.O.

Parentheticals provide context or instruction for the dialogue delivery. These should be used sparingly so as not to reduce the readability of the script.

Next, dialogue blocks are offset from everything else and centered on the page.  Parallel dialogue (overlapping dialogue) is written in side-by-side blocks.

The final element is the scene transition. These should be used sparingly as well.  Readability is key!

Additionally, there must be a 1.5-inch left margin with a 1-inch top and bottom margin, and the dialogue blocks 3.7 inches from the left side of the page. The easiest way to conform to industry-standard format is to use screenwriting software, like Final Draft.

Why Are There Such Strict Rules for Screenplay Format?

There are reasons -- generally, 1 page of screenplay will result in 1 minute of screentime, so a 120-page script that is correctly formatted should translate into a 2-hour film.

A screenplay is a document to sell a story to potential collaborators - including a director, producer, financier, actor, etc.  One of the easiest ways to tell an amateur screenwriter is non-standard formatting right off the bat.  So take the time to make sure your screenplay is in the correct format!

Read More: How to Format a Script