Sarah Gavron started her filmmaking career with a bang, winning a BAFTA for her debut movie, This Little Life. She followed that up with more successful films including Brick Lane, Village at the End of the World, and Suffragette, starring Meryl Streep before embarking on her latest feature film, Rocks. She sits down with fellow directors Giles Alderson and Robbie McKane from The Filmmakers’ Podcast to chat about collaboration and her filmmaking process.

Below are some key takeaways from Sarah Gavron about writing, directing, and collaborating with young actors. Rocks is out in cinemas in the UK on Sept 18th. Listen to the full episode below.

5 Tips for writing, directing, and collaborating with young actors

"I was working with this team of young actors and other creatives, and we were really, really holding each other's hands and making it together rather than the normal hierarchical way you make a film," Sarah says. "[Rocks] was a film about young people and I'm pretty far from that now. And it felt exciting to build a film with them rather than the other way round." A big part of this collaboration took place before the script even came together during the casting process.

"With the casting team, we found the young cast before we started the scriptwriting process. Well before the co-writers Theresa Ikoko and Claire Wilson put pen to paper. So it was all kind of, you know, an organic process," Sarah says. "Claire brought an idea to the group and it became the narrative arc, but then they all fed into it, re-working it and evolved from there."

Casting before you write the script

"We initially went to Film4, who we had a bit of a relationship with from previous films, and they were very supportive of the idea as well as the BFI," Sarah explains. "But they understandably took a lot of convincing because we didn't have any cast who had acted before."

We shot it all chronologically, so the young actors could live it moment by moment and almost forget what scene is coming up, just think about what's now, live in the moment and be present."

"When we initially set out on the process of casting, we hadn't got a script. But they went on that journey with us, bit by bit, and we kept on feeding back and having endless conversations and showing them footage from the workshops and talking to them about the evolution. They were really supportive and there was a whole group of execs there I'm really grateful to."

How to direct an improvised scripted film

"Rocks is great for observational filming because there was kind of freedom and we worked in this very collaborative way," explained Sarah. So that actually was oddly more akin to documentary in some ways, because there was such freedom on set and we were shooting all the time, adapting and being light on our feet and working around what was happening in front of us," explains Sarah.

One of the ways Gavron captured this improvisational feeling was to shoot the film in chronological order.

"So when filming started, Theresa and Claire had written this script and we were deliberately telling them to let go of it. Don't sort of 'learn the lines' or feel you have to stick to anything. Just come into the scene and we'll just talk you through what's going on. We shot it all chronologically, so the young actors could live it moment by moment and almost forget what scene is coming up, just think about what's now, live in the moment and be present."

How to use modern technology to your advantage

Gavron highlights the importance of technical production choices and how that influences the storytelling writers and directors have access to.

"It was always a choice to sort of just find things within the direction," Sarah explains. "I worked with camera women Hélène Louvart and Rachel Clark as they're a kind of duo. Hélène was the DoP and Rachel was working with her on another camera at all times. They would be dancing around the cast with their cameras and we just made this decision to do it on two cameras, right from the beginning, because that allowed us to not have to do endless takes. And actually the truth was every take was different."

And while the choice to shoot on two cameras lead to interesting footage, it also came with its own unique set of challenges.

"Maya Mafioli the editor, dealt with 50 hours of footage, and the cast would never be in the same positions. Then we also had iPhone footage to weave into it as well and everybody was radio miked so often in the biggest scenes — eight to ten radio mikes — and anybody could speak at any time and they're all overlapping. It wasn't like your normal controlled shoot," admits Sarah.

But that lack of control fueled new ideas and opened up fresh opportunities for the cast and crew.

"It didn't have any of those restrictions. We couldn't have done it without digital cameras. I mean, it would have cost a complete fortune. Fortunately, we rolled from the beginning of the day to the end of the day. So that was a release really."

On women behind the camera: Great female directors

"After learning about the great male directors I discovered that there were women filmmakers. I saw Jane Campion’s work, Sally Potter — that was hugely exciting. I thought, 'Oh, you know, women can do this!' And it was a case of you have to see it to believe it. You know, I just didn't know it was possible." "But then I actually genuinely can say that some of my favorite films just do happen to be directed by women. And there are some great British women directors at the moment. There’s Lynn Ramsey, who is a couple of years above me at film school, Andrea Arnold, Cleo Bernard, Carol Morley, Amma Asante, there are some fantastic women around as well as amazing inspiring European and US female filmmakers. I followed their work avidly and just got sort of excited every time there's a new film out by a woman."

On working with Meryl Streep

"The first time we worked with [Meryl Streep] on set, there were lots of paparazzi around. So we couldn't do the rehearsal on set. We had to cram into her trailer. So it's like sort of going on a camping holiday on the floor, rehearsing in the little trailer and she was eating scrambled eggs and we were having tea and chatting through it," Sarah says.

"So it all suddenly seemed very normal, but of course it wasn't. It’s Meryl Streep! But she’s a really wonderful, generous woman who knows what she’s doing. She’s worked with so many directors. You don't need to do very much, you know? She was just very committed; she's just a really committed woman."

Listen to the entire interview here:

And sign up for our newsletter for more insights from industry insiders, screenwriting competition announcements, and tips and tricks to help you take the next step in your screenwriting or filmmaking career. 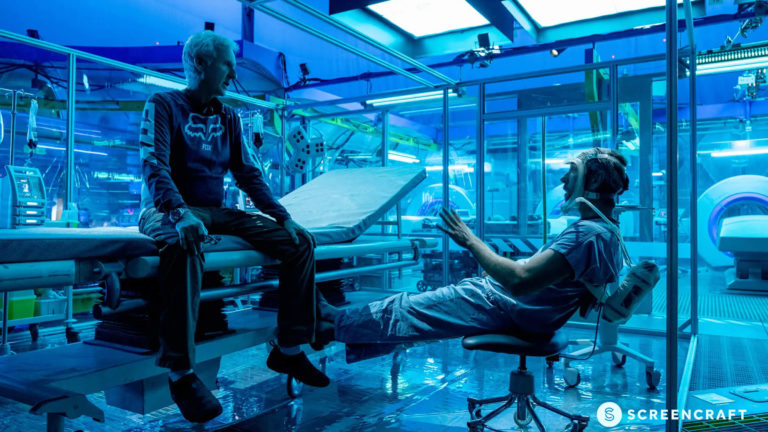