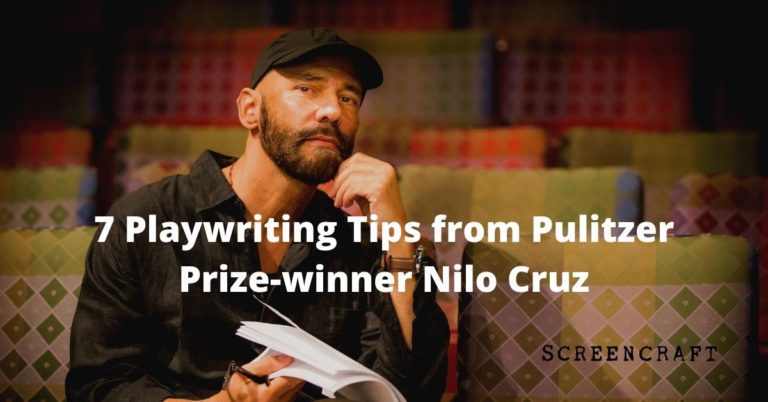 Cuban exile Nilo Cruz is known for creating emotionally powerful LatinX characters who slide in and out of magical realism. In a sense, Cruz is a poet first, playwright second, as he’s constantly searching for the beauty within language and in the overall human experience.

In 2003 Cruz became the first Hispanic-American playwright to win the Pulitzer Prize for Drama, which he was awarded for his play Anna in the Tropics. The play premiered on Broadway in 2004 with actor Jimmy Smitts in the lead role.

Here are seven pieces of advice from Cruz for playwrights as they embark on a journey to discover the stories within their own imaginations.

1. The secret to finding your voice as a writer is discipline.

Every writer needs to have their own distinct voice, or point-of-view. What is it that only you can express? That thing is your voice and it comes from your life experiences, culture and influences. A writer’s voice can come naturally or take many years to discover, but it should be uniquely your own. According to Cruz, this process takes practice and discipline.

“Discipline is very important as a writer,” says Cruz in an interview with DC Metro. “And the way to create discipline is through repetition. You can’t just depend on the muse to come. You have to write every day and try to refine moments and scenes and characters. You have to detach yourself from the world and become an observer and enter the writing process. But that takes discipline.”

2. Let your play be character driven, not plot driven.

Plays are a deep dive into the messy, painful and sublime human experience. People are complex, diverse and surprising. We all make bad decisions and suffer consequences. Cruz understands this and lets his plots blossom from the highly flawed characters he creates, not vice-versa.

3. Find the poetry in the dialogue and imagery.

In screenplays, it’s often said that dialogue should be just the headlines, or the bare minimum. But in a play, you have much more room to express a character through all that is spoken or even sung.

“Language needs to be heightened! Whether it is heightened through rhythm (more than anything I'm interested in rhythm), I think playwrights need to write images for the stage,” says Cruz to Broadway World.

In our daily lives, it’s easy to feel that the external world is dictating our actions and we are expected to respond appropriately. A play is a whole different beast that offers freedom from our current reality.

“Try to imagine the world with a question — ‘What if?’ I think that's a very important question to be asked with every play that one writes, especially when you're veering away from reality and using aspects of fiction. I think that's primordial when it comes to creating distance. ‘What if this had happened?’ ‘What if this person had done this?’ ‘What if this character enters the life of this other character?’” says Cruz.

5. Think of yourself as an exile.

While Cruz is literally an exile from Cuba, he sees his experience in a figurative sense as well.

“I think a writer is like an exile in some ways, because we look at things from the outside, from boundaries. It allows us to have certain kinds of perspectives, and not just to report on something the way that a journalist does,” says Cruz.

We all have forbidden territories society says we cannot explore. For some it’s gender boundaries, for others it’s crossing societal norms or the expectations of their family. Ask yourself, “What am I exiled from? What boundaries am I told a shouldn’t cross?” These questions will lead to deeply powerful themes to explore in your work.

6. Take inspiration from other writers.

Art isn’t created in a vacuum. A play should feel like a living, breathing organism that has a relationship to the past and present and be a part of a greater whole. Cruz recommends constantly reading and seeing plays.

“You constantly have to be dialogue-ing with other artists, whether they are dead or alive,” says Cruz. “It’s something that happens in all the art forms. You can see how Seurat was influenced by Van Gogh or how Van Gogh was influenced by Gauguin. The same thing happens in literature. We always have to be studying, studying what other writers are doing, how they deal with certain subject matters, or how they use characters who convey a story – a constant dialogue with other artists.”

Playwriting isn’t for the faint of heart. Give yourself permission to be bold and undaunted. Writing a play can be one of the greatest adventures you’ll ever experience and getting started, according to Cruz, is surprisingly easy.

“Start writing, and write about your community, write about your life. You don’t have to write about it in a direct way. … but start with the personal and see where that leads you. …. The thing is to be valiant and to write and to not be afraid. Don’t be discouraged or afraid of other literature that one has read or think that we’re incapable of writing like the great masters. I think you have to start from somewhere, and little by little, you find your voice. Take courage and find your voice as a writer,” Cruz says.