Want to write great horror? Low-budget horror movies are where it's at.
by Shannon Corbeil on October 24, 2022 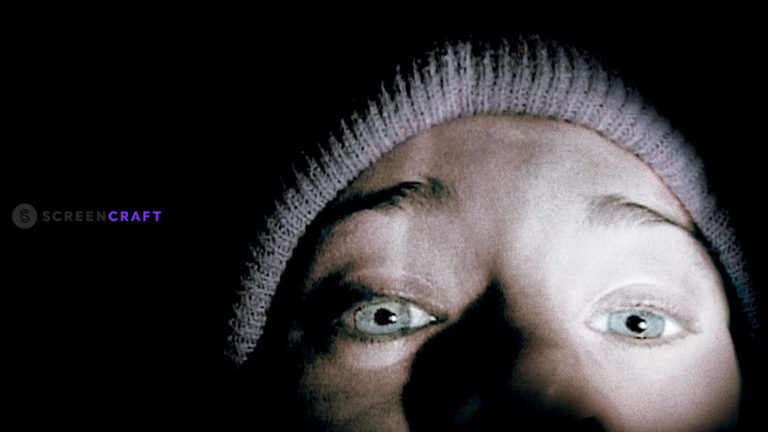 Horror movies continue to be an extremely successful film genre. Whether they're campy, terrifying, or full of jump scares, audiences love to be stimulated. Fear — and the anticipation of fear — is a great way to incite a psychological reaction. As a result, horror movies can be a great way to get your screenplay off the page. While many have incredible CGI and big-budget set-pieces, the truth is a clever concept and simple effects can go a long way when you’re trying to scare your audience, making low-budget horror movies an accessible route for indie filmmakers to finish projects and launch their careers.

Let’s look at some incredible examples of low-budget horror movies and explore what made them so creepy.

In 1999, a small group of filmmakers created a cultural phenomenon and launched “found footage” filmmaking onto the map. Daniel Myrick and Ed Sánchez created a 35-page treatment about three students who go missing after heading into the woods to make a documentary about a legendary witch. The students were never found — but their footage remained.

The co-directors took a big risk by not utilizing a screenplay but instead relying on actor improvisation. Over eight days, the actors lived in the woods, filming themselves and using GPS to find locations left for them by the crew where they’d leave their footage, pick up food, and go through director’s notes.

It cost about $35,000 to film the movie and roughly another $270,000 to edit and market it — but it paid off. The documentary-style film with eerie children’s voices, satanic-looking woodsy relics, and a possession-style finale not only became iconic — it played at Sundance with a line around the block and sold for one million dollars before making $248 million at the box office.

The takeaway for writers is that a small cast in an existing location is enough to tell a compelling and frightening story. The Blair Witch Project never actually shows the witch — instead, she is a looming presence in the dark, building the feeling of being trapped, lost, and hunted.

Think about the creepiest moments you’ve experienced in your life: the feeling of something sinister there with you in the dark, how vulnerable your bare feet feel when you approach a bed not knowing what is beneath it, or when someone you trust begins to act unnatural. Go for the realistic things in life that raise the hairs on the back of your neck — no CGI needed.

Inspired by The Blair Witch Project, creator Oren Peli shot Paranormal Activity in his home over seven days and nights. The film plays on the fear that something will get you in the dark while you sleep — and it made $193 million at the box office on a $15,000 budget.

Easily the most expensive film on this list, Get Out had a budget of $4.5 million, low for industry standards. It went on to not only earn $255 million at the box office but also garnered tons of accolades, including an Academy Award for Best Original Screenplay for director Jordan Peele, as well as three other nominations including Best Picture. Not only that, but Peele basically redefined the horror genre with Get Out. Not too shabby for a low-budget horror movie.

Get Out is a disturbing and haunting film about a Black man who discovers a sinister secret while meeting his white girlfriend’s family. Not only is it a terrifying horror concept, but the film’s smashing success is also undoubtedly due to its brilliant commentary on modern and historical racism.

“The best and scariest monsters in the world are human beings and what we are capable of, especially when we get together,” Peele shared with Indiewire. The realism of Get Out — and the haunting fate of its victims — added an extra charge to its scare factor that is both timely and astute.

If your horror script can scare people and make a point, you’re on your way to major screenwriting success.

Monsters is a low-budget sci-fi horror movie that takes place years after a NASA probe crashes in Mexico, bringing with it giant tentacled monsters. It follows an American photojournalist who escorts his employer’s daughter back to the U.S. through Mexico’s infected zone. With a budget of $500,000, director Gareth Edwards shot the film over three weeks with a production crew of six people. The film went on to premiere at South by Southwest, earn $4.2 million at the box office, and launch Edwards’ career (he would go on to direct 2014’s Godzilla and a little project called Rogue One).

Monsters is another example of a filmmaker remaining very discerning when they actually show their monsters. Like the Blair Witch, they loom as a threat in the darkness. They make terrifying sounds in the night. We see their destruction long before we actually see them.

Like other earth-altering horror films (see 28 Days Later), often it is the humans around you who can become the threat. Monsters keeps its audience on edge and shows how you can indeed create something out of this world for cheap.

Horror films are all about the concept — a good screenwriter utilizes anticipation, innate fears, and curiosity to thrill and satisfy their readers. Great horror films allow audiences to live out alternative realities like zombie apocalypses, alien invasions, or hauntings. They teach us about the darker side of humanity and maybe even encourage us to relish in some Midsommar revenge.

Take time to develop the psychology of your low-budget horror movie. What makes it scary? What makes it exciting? What piques morbid curiosity? What sense of accomplishment will survivors walk away with?

And mostly, have some fun — no one chooses to scare themselves because they think it’s boring!

Ready to get started on your horror script? Download our e-book!

Develop Your Movie Idea in 15 Days Shannon Corbeil is a writer, actor, and filmmaker in Los Angeles with recent appearances on SEAL Team and The Rookie. An Air Force veteran, her articles have been published in Business Insider, We Are The Mighty, and Military.com. She has written and produced hundreds of digital videos with millions of views. You can read more about her on her website or come play on Instagram and Twitter!