The Simple Guide to Writing a Logline 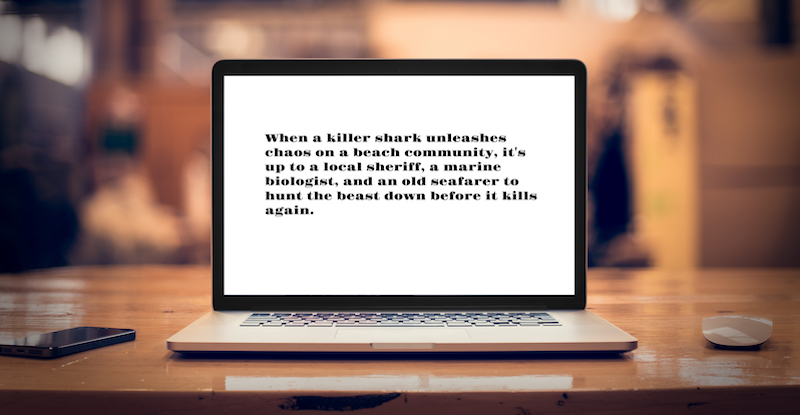 What are some simple guidelines screenwriters can follow to write effective loglines?

Writing a compelling and engaging logline is an art form unto itself. But much like screenwriting, there’s no secret formula to success.

Here we step away from in-depth directives, theory, and rules to offer simple guidelines that you can apply to your process to help you write the most effective logline for your screenplay.

Loglines are a necessary evil in Hollywood. And many perceive them as being "evil" because they feel that the industry is asking them to condense their one hundred page script (give or take) to 25-50 words.

Nothing could be further from the truth — and that is the first logline lesson that screenwriters need to learn.

You're not telling a story in a logline. You're presenting the core concept of your script. And in Hollywood, concept is everything.

It's the first selling point of your screenplay.

It's what gets you into the conversation.

It's what you, managers, agents, development executives, and producers will initially use to get your script considered, pitched, purchased, developed, packaged, financed, produced, and distributed.

It's the first contact Hollywood will have with you and your screenplay.

When industry insiders read a logline, they need to be presented with:

Those are the elements that comprise the concept of a story.

If you let go of the false notion that you have to tell your whole story in one or two sentences, you'll ignore the need to include elements that aren't central to the core concept of the story you are trying to tell.

Supporting characters, B stories, C stories, twists, turns, and reveals? Save all of that for the pitch and the script itself.

This, along with other variances, is the basic logline formula that can help get you started. However, this isn't a simple fill in the blank process. It merely allows you to identify the inciting incident/major conflict, the protagonist(s), the goal they have within the story, and the main stakes.

After that, it's about tweaking the verbiage and structure to make it short, sweet, to the point, and leaving the reader wanting more.

Industry insiders don't have time to read a synopsis or treatment. They need to make decisions quickly because there are so many screenplays that they need to get to during their day-to-day schedule.

Hollywood uses a filtration process to weed through the hundreds upon hundreds of screenplays within the market. Before that filtration process of script readers, referrals, and contests/competitions/fellowships, reading loglines is the fastest way for them to tell if your script has a concept, character, and story that they want to pursue.

And loglines help you to communicate what you're trying to sell without going off on tangents and overly-long explanations.

So stick as close to twenty-five words as you can. It will take some time to master, but once you begin to identify the core elements of a logline, it'll be easier to carve those words away.

This rule can be bent, but you can make more of an immediate impact by using character types rather than character names. This offers the reader an instant protagonist description that they can envision for casting.

Now that you have an amazing logline, use it to impress in a competition or fellowship!

Search for Irony in Your Concepts

Irony is an easy way to convey a concept.

If you place unfamiliar personalities or character types together or introduce a fish out of water scenario, that's strong concept irony and conflict that is easily communicated in as few words as possible.

A fast-track lawyer can’t lie for 24 hours due to his son’s birthday wish after the lawyer turns his son down for the last time.

A seventeen-year-old aristocrat falls in love with a kind but poor artist aboard the luxurious, ill-fated R.M.S. Titanic.

A toon-hating detective is a cartoon rabbit’s only hope to prove his innocence when he is accused of murder.

Not all concepts showcase great irony, but if yours does, utilize it.

Writing the right logline is all about trial and error.

Start with a structure, as mentioned above, and identify the elements within your concept that you need to share. Then tweak what you have by shifting the placement of those elements within the structure of the sentence.

Write ten, twenty, or thirty versions of the same logline, then review them all and create hybrids of certain ones that stand out most. You'll often find that two or three versions have elements that you can combine to create the most effective logline.

Write the Logline Before the Script

This practice will help you kill two birds with one stone.

First, when you start with a logline, you're helping yourself identify the core of your story, making it easier to focus on the story window of your screenplay.

A Rebellion arises to fight the tyranny of a Galactic Empire.

That's not a very narrow story window to focus on as you develop a screenplay.

But when you introduce a specific protagonist (Luke Skywalker), showcase the world they live in (farm), and present them with a central conflict and inciting incident (delivering plans for a space station that's threatening the galaxy), you have a story window to work towards. That's the core of your screenplay.

The development work you do after that — visualization, outlines, treatments, bullet point breakdowns, scene lists, or whatever your process entails — is built from that core as you create story and character branches from it.

And then when the script is done, you already have a logline to work from as you rework it to fit the final draft.

Reading loglines is the best way to learn.

Go to IMDb and search for movies that are similar in genre, subject, tone, or character types. Then simply pull the character type, inciting incident, major conflict, objective, and the stakes from those loglines and insert your own. This is perhaps the easiest way to find the structure that best suits your concept.