What screenwriting lessons can we draw from the words of one of our generation’s most celebrated screenwriters and directors — Francis Ford Coppola?

Coppola first earned a Best Screenplay Academy Award for 1970’s Patton. In 1972, he directed one of his best works, The Godfather. Coppola received his first Oscar nomination as director and was awarded his second screenplay win. The film went on to win Best Picture. The sequel, The Godfather Part II, is often considered even better than the original and one of the most celebrated sequels of all time. Coppola won Oscars for Best Adapted Screenplay, Best Director, and Best Picture.

While his films since haven’t garnered as much attention after an extended break from writing and directing, he remains to be an iconic figure of cinema.

Here we feature some of Francis Ford Coppola’s greatest quotes on directing, writing, and cinematic storytelling as a whole — followed by our own elaboration.

1. “You can’t make art without risk, any more than you can make babies without sex.”

It’s a Catch 22, we know. Hollywood is very risk-averse, but they pay most attention to spec scripts that take risks and are different. Yet Hollywood development insists that you adhere to current trends.

But make no mistake, no matter what anyone says, you need to take risks in your screenwriting. Many agents, managers, and development executives want the next version of whatever hot trend is making money, but the best of the bunch are always on the lookout for the next hot trend. And that may be you and your screenplay.

Take risks. Flip trendy concepts on their backs. Play with audience anticipation. Take readers down a formulaic path, only to push them onto a much different and unexpected one.

2. “The way I write is like I have a great, big ball of dough — pasta. And I’m writing… once in a while I’ll take some and make pizza. Or I make a cake. But it’s all the pasta of my life. All the ideas I have. Something I saw, or I dreamed, or an observation.”

You are continually molding your writing throughout your career. But the whole craft you create doesn’t serve once single vision, project, or purpose. You lend bits and pieces to different stories that you want to tell. A feature movie here. A television series concept there. A comedy. A drama. An action flick. A horror thriller.

The hidden meaning behind this is to understand that it’s not just about one thing. Too many screenwriters focus solely on one screenplay. You’re honing your craft and creating a process that doesn’t serve one entity. It serves multiple. And the more you mold that craft and process, the more it changes and can be applied to something else.

3. “It doesn’t have to be a whole developed idea. It just has to be like a seed. And then when I’m ready I’ll just work on it every day.” All concepts start with a seed. And it’s your job as a writer help that seed grow. And you accomplish this by finding good soil to place it in (genre), giving it water (character), feeding it food to accelerate the growth (story), and giving it light to grow (watching movies and television series episodes to ignite your imagination).

This is how you work on it every day. It doesn’t always have to be fingers to keys. You develop it first and then watch it grow.

While writing the short story version may not be for you, what can you do that makes you look at your script from another way?

5. “Just write the ending [first]. The ending is obviously very important, and it’s where everything has to go.”

If you don’t know where you are going, you’re never going to understand what direction you should be heading. With novels, you can certainly let the characters take you there because there’s more freedom within the pages and the number of pages you can write.

With screenplays, you have no such freedom. You need to know where you’re going. And knowing the ending first, before you begin writing, allows you to pepper your script with plants, payoffs, twists, turns, and foreshadowing — all of which are essential elements to an exciting and engaging screenplay.

6. “The same thing you get fired for is what they give you the Lifetime Achievement Award for thirty years later.” You’re going to hear a lot of noise in your screenwriting journey. Lots of advice, directives, rules, regulations, etc. Some of it is good and helpful, but some of it is crap.

You’ll have development executives, producers, and representation declare that what you’re writing isn’t up to par — that you need to take fewer chances and write more like this successful feature or that successful writer.

During your journey, you’re going to have to learn the difference between what is excellent advice that will help you advance your writing, or what is just noise that you should avoid. And there’s no secret to that, mind you. You’ll know with time and experience.

7. “You have to really be courageous in your instincts and ideas. Otherwise, you’ll just knuckle under and change it. Things that might have been memorable will be lost.”

As you can read, risk is a common theme in Coppola’s career. And you’ll find that most notable screenwriters and filmmakers stood out because of the risks they took.

No one remembers the screenwriter that wrote that remake, reboot, or conventional action flick we’ve seen a hundred times. The ones that are remembered are those that stick to their guns, trust their instincts, and bring something new to the table.

8. “You outta love what you’re doing… you really have to love the project and love the story because, over time, you’ll really start to hate it. And the fact that you say, ‘But I really like what this is about…’ is a very valuable asset.” You first have to love the process of screenwriting, even though it can be tough. Because if you don’t love it and you’re just chasing a buck, you’re going to burn out real fast.

You then have to make sure that you love whatever concept you take on. You can’t chase trends or decide to write a particular script because it’s similar to a current trend or hit. If you don’t love it, it’s going to be a waste of your time.

Screenwriting takes passion. You need to have a passion for whatever you write. And if you get to the point where you become a work-for-hire writer, you’re going to have to find a way to love that assignment.

9. “I was always the black sheep of the family and always told that I was dumb, and I had a low IQ and did badly in school.”

It’s easy to think that successful icons like Francis Ford Coppola were born with some embedded brilliance — and that things came easy for them. Nothing could be further from the truth for most.

These icons had to struggle. They failed as much as you will in your screenwriting career. They got where they are today because they worked hard, believed in themselves, and didn’t let anything or anyone stop them. When they were told they couldn’t, they did. 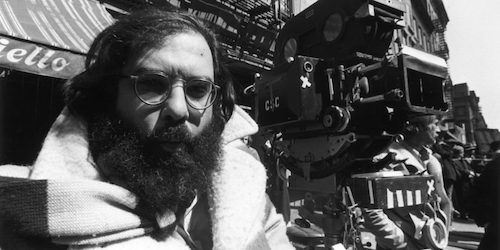 That’s what it takes. Be obsessive about your work. Put your heart, body, and soul into it. Don’t try to find the time to write — make time.

11. “A number of images put together a certain way become something quite above and beyond what any of them are individually.”

A beautifully written scene makes no impact on the reader or audience if average scenes or moments surround it. Every scene that you have in your screenplay has to count.

You can write the perfect scene, full of intrigue and outstanding characterization, but if you follow it up with a mundane, exposition-heavy scene that exists just to keep the plot moving along, that perfect scenes before it is wasted.

Editing is everything. Make sure that you edit your scenes and your moments together in such a way that they transcend one another by existing that much better as a whole.

12. “You’re in a profession in which absolutely everybody is telling you their opinion, which is different. That’s one of the reasons George Lucas never directed again.”

If you’re going to be a cinematic storyteller, you need to develop thick skin. Everyone will have an opinion on your work from the moment you share it to the moment an audience watches it come alive on the big screen.

Cinema is subjective. There’s no way around that. Everyone brings their own baggage to that script read or to that movie theater — their own wants, needs, and desires.

You can’t please them all. It’s impossible. But at the very least, when it comes to feedback and constructive criticism, you should consider what they are saying.

But in the end, trust your instincts, take risks, and don’t be afraid to swim against the current.

13. “Usually, the stuff that’s your best idea or work is going to be attacked the most.”

For whatever reason, this is often the case. And it’s likely because your best work is that which pushes the envelope, tests the bounds, and takes risks.

And Hollywood is risk-averse — until one person takes a chance and what was once thought of as a risk is now the new sought-after trend.

14. “When I was sixteen or seventeen, I wanted to be a writer. I wanted to be a playwright. But everything I wrote, I thought was weak. And I can remember falling asleep in tears because I had no talent the way I wanted to have.”

It takes work. Nobody gets it on the first try. There are no such things as overnight successes. You have to write, write, and write some more to develop your talents.

15. “Some critics are stimulating in that they make you realize how you could do better, and those are valued.”

Always be open to constructive criticism. You evolve as a writer by failing, learning from your mistakes, and being open to suggestions.