10 Things to Delete From Your Dialogue Scenes Right Now 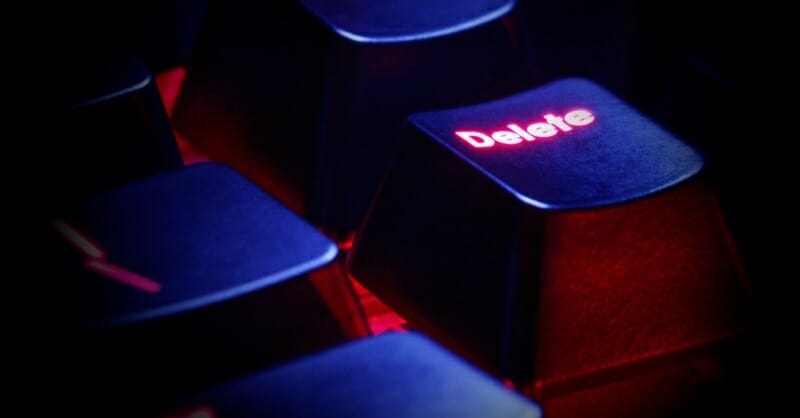 What are some of the most common mistakes screenwriters make when writing dialogue scenes?

In most screenplays, there are at least a couple of lines of dialogue in every scene. Which means that screenwriters are always susceptible to the many common mistakes made when writing and formatting dialogue exchanges and the scene description in between.

Here we have an example of a dialogue-heavy scene, written with a number of mistakes that we'll soon point out. The page count is roughly one and three quarters.

It's a short scene, which is good — consisting of only a page and three quarters. But let's take a closer look at what some may deem as, at the very least, a passable scene.

In the opening lines of the scene, the writer chooses to use the parenthesis as a way to direct the potential actor's performance by inserting an adverb to denote the type of emotion that the line of dialogue should be delivered with.

This type of screenplay element should be avoided when you're writing your dialogue. It's tempting, we know. You, the screenwriter, have a sense of what emotions are behind the words because you hopefully see the scene within your mind's eye and are trying to communicate that visual in the best way possible.

However, film is a collaborative medium. A director and actor often work together to enhance the words that screenwriter's write. So in this case, remorsefully might not be the better choice compared to a possible actor's note of performing the line with a sense of distaste.

Being remorseful and having distaste towards someone are two very different emotions and types of line delivery.

In short, don't limit the dialogue by assigning a specific adverb and performance direction.

Yes, there are times when a particular type of line is appropriate to the story and must be performed in a certain way. But using parentheses to direct the actor or convey a specific emotion should be used few and far between. Too many writers overpopulate their dialogue with those types of parenthetical direction. It's more often than not a waste of prime screenplay real estate.

The writer chooses to use the parenthesis to convey a pause in line delivery by using the term beat. This is an acting reference that has many different types of meanings, only one of which implies a pause.

Once again, the writer is defeating the nature of film collaboration by trying to dictate where an actor should pause in their performance. That's not the screenwriter's job.

Screenwriters need to leave that type of interpretation to both the reader who reads their script and the eventual actor that performs their dialogue.

If the story and plot call for the character to pause their dialogue for whatever good reason, write (pause) instead of (beat). Or better yet, insert a line of scene description that explains the reason behind the pause.

The ellipse (...) can be used in place of writing pause within a parenthesis, yes. But with that knowledge, most screenwriters are tempted to overuse them to, once again, direct the actor's performance of the line.

In our example, Jack's first line of dialogue utilizes multiple ellipses to denote a confused demeanor, complete with pauses between words as he searches for what to say.

To add to the mess, the writer has also decided to include (confused). This is not only redundant, but both the parenthesis and ellipse are entirely unnecessary.

Beyond the collaboration issue, multiple ellipses break the flow of the dialogue. It's overly formatted screenwriting that does more harm than good.

The reader's interpretation of the scene doesn't need to be spelled out by pauses and hesitations. The nature of the character and the situation they are in will inform the reader how the line is being delivered.

4. An Ellipse Is Not Used for Interruptions

When you end a line of dialogue with an ellipse, the true purpose is to denote that the character is trailing off in their words or waiting for someone to finish what they are saying.

5. If You're Going to Have the Characters Swear, Have them Swear

The writer chooses to use symbols to portray what would be an F-bomb within the dialogue (see above image).

Don't worry. You're not going to offend the reader, producer, executive, director, or actor. They've read and said plenty of strong language in this industry. And if you're not comfortable writing it, maybe the word isn't necessary.

Read ScreenCraft's How Writers Can Use the F-Word More Wisely!

From a characterization standpoint, it sometimes is necessary though. Don't be shy and don't make it difficult for the reader to decipher which swear word to choose from. There are so many.

6. Delete Lines that are Underlined and in CAPS

We understand the meaning behind underlining lines of dialogue and putting them in all CAPS — you want to communicate that the line is to be said with force or should be accentuated in some way, shape, or form. When screenwriters use CAPS in dialogue, they're trying to make sure we know the character is yelling.

Wrong. It's overly busy formatting and overly-used, which breaks the flow of the dialogue and, on a lesser note, hurts the reader's eyes (especially the CAPS).

You can use exclamation points to dictate whether or not a character is yelling. That's kind of the point of the exclamation point — they are exclaiming something, which is defined as crying out suddenly, especially in surprise, anger, or pain.

7. But Don't Overuse Exclamation Points and Other Punctuations

One exclamation point or question mark is enough. We'll even give you two on occasion if you want to further convey emphasis. But when screenwriters unload ridiculous amounts of them after a line of dialogue, it's getting to be too much — and looks very unprofessional.

8. Know the Difference Between "Voice Over" and "Off Screen"

Now, there's some gray area here because some readers have different definitions and preferred usages of the two.

Voice Over (V.O.) should primarily be utilized for narration, meaning that the Voice Over dialogue is attributed to a character that is not only not on screen but also isn't directly involved with the present scene at all. They are literally narrating the scene.

Off Screen (O.S.) should primarily be utilized for anyone that is literally not present on the screen but is technically in the vicinity of the characters that are. This could mean that they are just off camera (you can also use the more specific O.C. for that), hiding or hidden behind something, or are located in an adjacent location to the one seen on screen.

The gray area lies within the cinematic realm of phone calls, radios, and other devices that can bring Off Screen characters into the present on-screen scene via their voice.

In our example, Jack's Mom is just upstairs and is yelling out her dialogue down from an adjacent room. The Eighth Grader (Timmy) is connected to the scene through Jack's gaming headphones. (V.O.) is the improper way to incorporate them in the seen because Voice Over denotes narration.

This is a very common and misunderstood element of screenplay format that even seasoned writers forget or don't understand. But from a reader's perspective, Voice Over is narration and Off Screen means that the character is still connected to the scene, but just isn't physically present within it.

9. There's No Need to State the Obvious

Whether you are using parenthesis or a line of scene description, there is absolutely no reason to state what is evident to the reader.

In the original example, (she can’t believe it) isn't necessary. It's obvious from the dialogue that "she can't believe it."

When Jack is yelling up to his mom, that is communicated through the exclamation points. The writer doesn't need to include (yelling).

In the scene description, the writer states the obvious by detailing that she’s waking up to the fact that she’s either dating a man-child or something worse. The previous lines of dialogue point to this already.

Writers often feel the need to overexplain things to the reader. Readers read dozens of scripts per month, as do agents, managers, producers, executives, directors, and actors. They'll get it. And if you don't spell it out for them once (let alone twice), they'll more than likely assume it.

10. Avoid Any and All On-the-Nose Dialogue and Description

On-the-Nose is often defined in writing terms as words lacking in subtext, too obvious, and/or having neither subtlety nor sophistication.

If a character is feeling angry, this shouldn't be accompanied by an obvious line of dialogue that states just that. "I'm so angry at you right now!" That's bad dialogue.

In our example above, Kate offers on-the-nose dialogue that just isn't necessary. The reader will pick up on the subtext of the scene that clearly communicates that she has finally realized what she has gotten into with this relationship.

The writer also uses scene description for this very same piece of information.

Here is a rewritten version of the scene that better adheres to the ten points we've covered so far. It "clocks in" at a page and one quarter, one half of a page less than the original version. While it may not seem like that much, consider those lousy writing habits spread throughout the whole screenplay. We also showcased some examples of when you can use parentheses.

The rewritten version uses parenthesis to point out that Timmy's dialogue is coming from a specific place. This avoids the initial confusion that a reader may have as they try to place where that unseen character dialogue is coming from. We do the same for Jack's Mom as well to denote that she is calling from upstairs, which is an adjacent room to current scene location.

And lastly, we use parenthesis to communicate that Jack is saying that very last line to himself. A perfect example of a choice you can make that doesn't necessarily mean you're directing the performance. Instead, you're detailing the context of the line and who it is directed towards.

Eliminating these ten unnecessary screenplay elements from your screenplays can save you multiple pages in the long run. It can also help with the read of your script, creating a better-paced screenplay and cinematic experience for the reader. And your dialogue scenes will flow so well.

It's not about being nitpicky. It's about getting you to the tightest draft possible.