What's the proper way to format a montage within a screenplay and how do you know when to —and when not to — write them? We're going to explore that question here for this installment of our ongoing Screenwriting Basics series.

Whether it's a Pretty Woman trying on luxury clothes or a Philadelphia boxer named Rocky training to go the distance, the montage sequence continues to be a cinematic staple.

The term "montage" is defined as the process or technique of selecting, editing, and piecing together separate sections of film to form a continuous whole.

Within a screenplay, the montage is a compilation of short scenes or moments — usually with little to no dialogue — that are grouped together to convey a passage of time quickly while communicating necessary visuals and moments within that condensed timeline.

Those visuals and moments showcase character and story arcs, either in the progression of building to a particular arc point (Rocky running up the stairs, ready for the big fight) or merely showing multiple characters in multiple places reacting to something. Montages can even be used to sum up a character's experience in multiple or single locations by using visuals and moments that best communicate that experience.

It's not meant to be used as a cheat by any means. Some screenwriters think that montages allow them to throw in any information in quick fashion without having to craft full scenes around that information. That's not the point of the montage. The point is to offer the reader or audience a visual experience that summarizes a gap between two pivotal scenes or between two story acts.

So how do you format them?

There are many examples of montage formats that have evolved over the years. The key is to keep the format as simple as possible.

A character or group of characters are in a single location, and you want or need to convey their passage of time there.

One of the best and most iconic examples is the shopping scene in Pretty Woman. Edward is taking Vivian shopping. The scene is meant to convey a fun moment of this call girl experiencing being pampered through trying on and buying luxury clothes that she could never have afforded. It is a moment that is the antithesis of an earlier scene where a luxury shopping store rejected her because of the way she was dressed.

While this montage scene wasn't in the original first drafts of the script, we did find a similar, yet more intimate, scene — not present in the final cut of the film — that captures the simple format of writing a single location montage.

Edward and Vivian are in the penthouse living room as Vivian tries on the many dresses she bought during her shopping spree. The display turns intimate as she begins to try on lingerie.

The montage ends as a new scene header for the scene takes them to the bedroom.

As you can see, the montage opens with a header that dictates what type of scene this is — MONTAGE. That header alone would have been enough, but the writer chose to be more specific by adding OF VIVIAN'S OUTFITS.

In certain montages, you want to be sure to communicate when the montage scene ends by simply writing a header in caps — END MONTAGE. However, in this case, the montage leads directly into another scene and location. When the new scene heading dictates a new location, it's implied that the montage is over.

Had the scene continued in the same location after Vivian tried on the outfits, the END MONTAGE heading would have been utilized and the scene description and dialogue could have gone on from there as usual.

Here's another example of a single location montage from the spec script The Purple Heart Battalion. The script tells the true story of the all-Japanese-American infantry during WWII that battled racism and prejudice while trying to prove themselves ready to fight for their country.

In this scene, the single location is a baseball field as Japanese-American soldiers play a game of baseball against a local white team. This example would be perfect for those writing the inevitable montage sequences found in sports movies.

It's simple and manages to capture story and character arcs as well. As you may notice, the formatting changes. It's an excellent example of clean and straightforward format, using what is similar to a bullet point or dash list system. This format is one of the more contemporary versions used in screenwriting today.

Writing a montage in your feature or pilot?  Use our helpful eCourses to get it done faster. The multiple location montage is often the most utilized within screenplays.

The first — and most common — way is to continue using the MONTAGE and END MONTAGE (if applicable) headers followed by simple lines of scene description for each visual or moment (and variances thereof).

The science fiction blockbuster Armageddon has many montage sequences.

The training sequence where the drilling crew finally succeeds in their tests is simple and straightforward.

As you can see, the writer embraces the quick and simple mantra — literally.

The writer also uses a different variation by utilizing the SCENE HEADING to dictate that the scene is a montage.

This is a perfect example of a multi-location montage that focuses on specific imagery to convey reactions from multiple characters.  The script uses the scene heading instead of a header in caps within the scene description.

Within the same script, the writer offers a more extensive, but still simple, montage. The format change with this example uses the aforementioned dash list system, although in your spec scripts you don't need to mention quick cuts because each line of scene description implies a cut to another moment.

A cleaner example of this list system can be found in the spec The Purple Heart Battalion as well.

In this version, each visual or moment of a montage is represented using a series of short scenes — each having just a scene heading (slugline) and a sentence or two of description. No mention of montage at all. The reader will usually be able to see and understand that there’s a montage occurring because of the briefness of scene description for each short scene.

In Rocky, we have a good example of this type of format showcasing multiple locations within the montage.

Here is how the original Rocky training montage was formatted in an early draft of the script. Short simple scenes of Rocky training are used, all of which build to the final, now iconic, image of him running up the art museum stairs. The dated script uses STILL LATER instead of DAY or NIGHT to convey that the action is taking place in the same location but at different times.

The best example using this simple screenwriting format to convey a montage can be found in arguably the greatest — and most touching — montage sequence ever to grace the screen, found in Pixar's Up.

The film brilliantly portrays the relationship of Carl and Ellie from playful beginning to sad ending. The format is simple and straightforward, not requiring any colons, headers, or list systems.

Read the script's version and then watch the scene in its entirety. 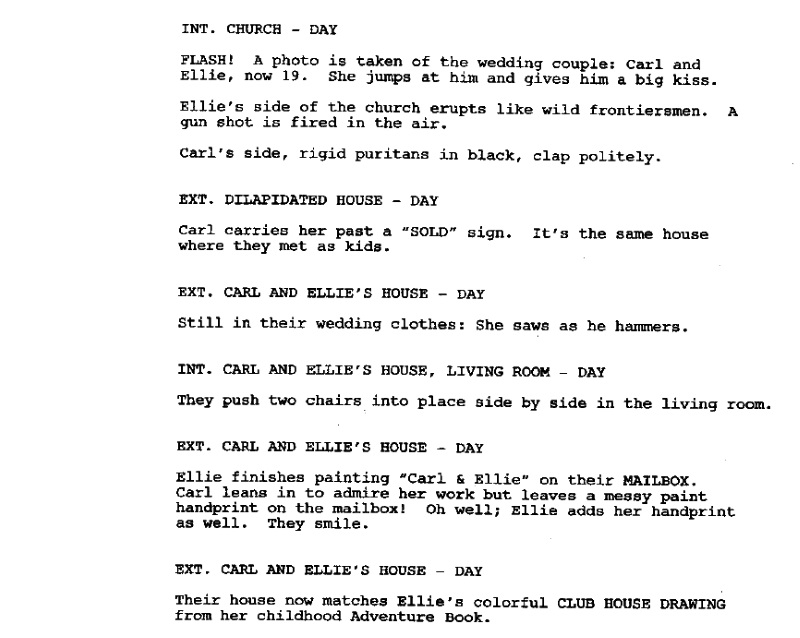 As you can see, there are a few options to consider as you write and format your montage scenes within your script.

Does your montage scene take place in a single location?

Does your montage scene take place in multiple locations?

Do you want to utilize headers that tell the reader where the montage begins and ends or do you want to imply it using a sequence of short scenes with short scene description?

The key is to convey those visuals and moments in the most simple and effective way so that the reader can quickly envision them as they move along with the story.