If you haven’t noticed yet, we’re currently in the second Golden Age of Television. In fact, it’s not even fair to label contemporary television as second to anything because it has never been better.

There are more channels — streaming, network, and cable — producing groundbreaking content than there have ever been. It’s quality and quantity these days.

If you don’t already have it, we highly recommend ScreenCraft’s ebooks, especially An Introductory Guide to Writing for Television: In Hollywood, everyone is going to television. As screenwriters, if you don’t have a pilot sample or you’re not currently developing television concepts, many agents and managers won’t even represent you. They seek out writers that can perform on both platforms — film and television.

Because of this influx of content, screenwriters that do want to play in the television sandbox are slowly learning the differences between the formats of shows.

We’ve previously covered formatting general television pilot scripts in our post The Screenwriter’s Simple Guide to Formatting Television Scripts. We touched on sitcoms and dramas, breaking down the format, acts, and overall structure.

However, there’s one anomaly that was left untouched. And it’s actually a pretty big elephant in the room as we’ve discovered through multiple email queries regarding the difference between the format of a single-camera sitcom and a multi-camera sitcom.

But first, before we jump into the differences, be sure you mark your calendar for ScreenCraft’s TV Pilot Screenplay Competition!

The “single-camera” sitcom has grown in popularity in the last decade. Shows like Modern Family, Silicon Valley, and The Last Man on Earth are perfect contemporary examples.

While the “single-camera” label is a misnomer — such shows often use more than one single camera — the key element is that the show is shot much more like a film, without a live audience.

Because of this, the humor is often different, playing much more like a feature comedy would.

Single-camera scripts are usually 22 to 32 pages long. Sometimes they go up to 35. Since sitcoms consist of 30-minute episodes, the page-to-minute ratio needs to be close to that mark. Screenwriters need to also take into account commercial breaks. Most sitcom episodes are actually only around 22 minutes long because of them.

Multi-camera sitcoms represent the more traditional approach to television comedy, dating back to shows like The Dick Van Dyke Show, The Mary Tyler Moore Show, Three’s Company, Family Ties, Seinfeld, and Friends.  The contemporary multi-camera shows like The Big Bang Theory have taken the torch from those classics.

Multi-camera sitcoms are basically everything filmed in front of a live studio audience. The humor presented in such a show is much different because of that audience factor. While single-camera sitcom filming can be equated to feature film styles, multi-camera sitcoms are similar to live theater. There are stages set before an audience and the “play” is captured on multiple cameras as actors walk from one set into another, often in just one take with multiple cameras capturing the necessary angles to create an otherwise seamless experience for television.

Because of this, multi-camera scripts have a more technical approach in their format, which takes an otherwise 22-32 page television script and turns it into a 52-58 page script (see below).

Single-camera sitcoms are written in a more standard format, much like feature film scripts. The structure is different than features, but the actual format utilized is pretty much the same. 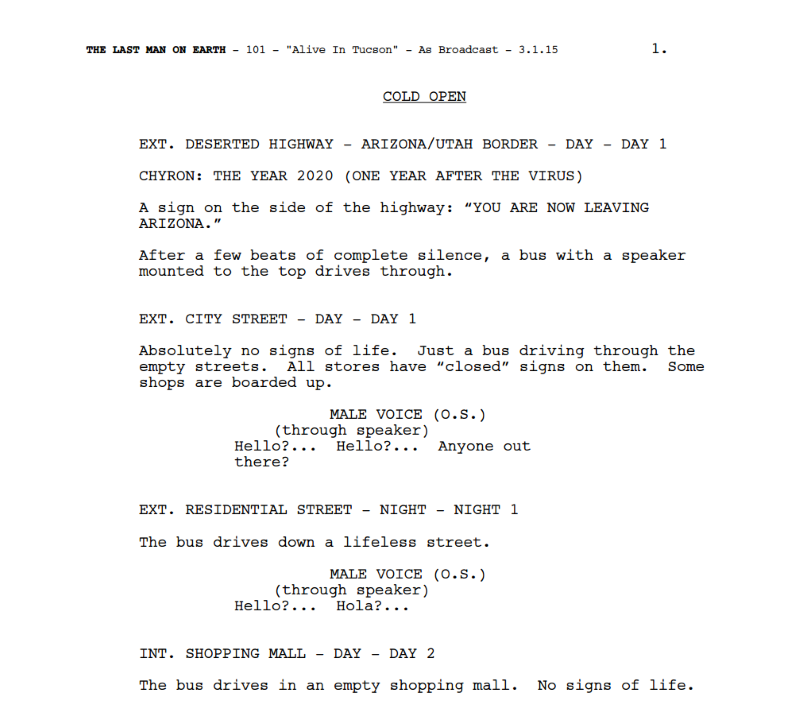 Multi-camera sitcoms are a whole different formatting beast. To truly capture that format, screenwriters should be using screenwriting software that has those pre-set templates. 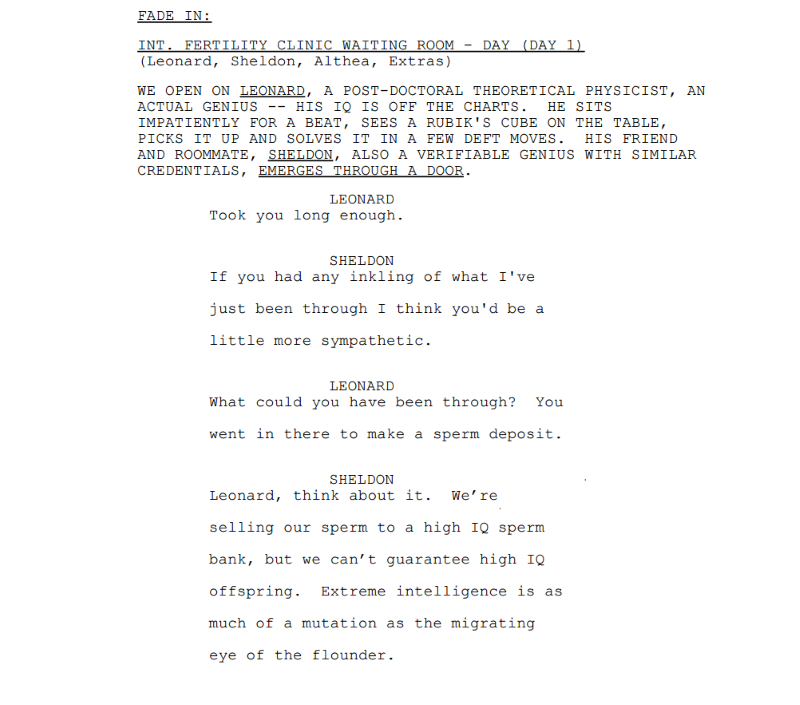 You can see that there is a major aesthetic difference.

How Multi-Camera TV Scripts Differ from Everything Else

Multi-camera sitcom scripts don’t, primarily because they are shot in front of a live audience. They are produced much faster per episode than single-camera shows, with most sitcoms shooting more than one episode per day in front of that live audience. Thus, these types of episodes need a more technical and streamlined format for specific production productivity.

The major differences you’ll see in a multi-camera sitcom script are:

The double-spacing of the dialogue, as well as the CAPS usage for all scene description, are what really causes multi-camera sitcom scripts to have nearly double the number of pages, despite the fact that both single-camera and multi-camera sitcom episodes are around 22 minutes long.

As is the case with feature film scripts, different networks and shows will have many different format nuances. This goes for both single-camera and multi-camera shows.

One show may insist that this or that element be underlined or in caps, while the other will insist the opposite. These are called anomalies because a majority of the time, the format is pretty universal due to the fact that television writers often jump from one job to the next or transition from one network to another.

When Should Novice Screenwriters Use the Single-Camera and Multi-Camera Format?

There are a couple of different arguments here.

Novice screenwriters are better off utilizing the single-camera format for their spec pilot scripts — regardless if it is a single-camera or multi-camera sitcom — because it best mirrors the standard format that they likely learned in screenwriting books, classes, seminars, etc. Because the multi-camera format is specialized for production purposes, it would be easier to write the sitcoms using the format and structure showcased in our TV formatting post.

An accompanying issue is that many novice screenwriters often aren’t qualified or educated enough — in regards to television development and production — to decide whether their pilot script should be single or multi-camera.

Some actors may prefer the single camera approach because it mirrors their feature filmmaking process while other actors prefer to have a live audience to play off.

So, in this argument, perhaps novice screenwriters should avoid the multi-camera format and just focus on using regular screenwriting format to tell their funny story — especially when submitting to contests, competitions, and fellowships.

If novice screenwriters want to be television writers, they need to know the ins and outs of the specific formats that they’ll be writing in. Knowing the specialized multi-camera format will then be necessary. Why not learn it now and be ready?

Overall, novice screenwriters looking to get into the television writing business should read as many contemporary television scripts as they can to stay in touch with what the general guidelines and expectations are today.

As an educational treat, we offer a collection of iconic and successful single-camera and multi-camera pilot scripts for you to read and study. Enjoy!

These scripts are meant for the “fair use” practice of educating screenwriters on the format and aesthetics of television industry scripts.

Do you have an amazing pilot script of your own? Enter it into ScreenCraft’s TV Pilot Screenplay Competition!